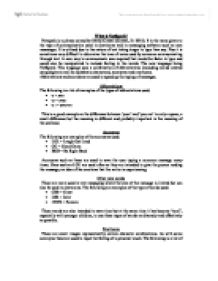 What is NetSpeak? Netspeak is a phrase coined by David Crystal (Crystal, D. 2001). It is the name given to the type of communication used in chatrooms and in messaging software such as msn messenger. It is utilised due to the nature of text taking longer to type than say. Plus it is sometimes very difficult to determine the tone of voice used by someone communicating through text. A new way to communicate was required that would be faster to type and could also be manipulated to include feeling to the words. The new language being NetSpeak. This language uses a combination of abbreviations (including words created using digits as well as alphabetic characters), acronyms and emoticons. Abbreviations and acronyms are used to speed up the typing of messages. Abbreviations The following is a list of examples of the types of abbreviations used: * u = you * ur = your * u r = you are This is a good example as the difference between 'your' and 'you are' is only a space, a small difference but the meaning is different and probably important in the meaning of the sentence. Acronyms The following are examples of the acronyms used: * LOL = Laugh Out Loud * GG = Good Game * BRB = Be Right Back Acronyms such as these are used to save the user typing a common message many times. Ones such as LOL are used often as they are intended to give the person reading the message, an idea of the emotions that the writer is experiencing. ...read more.

Furthermore, this has occurred to such an extent that some of these have been added to the Oxford Dictionary as they are seen as being an integral part of the English language [Computing, 2001]. Netspeak is the name that has been given to the long list of acronyms and smiley faces that have evolved with the Internet. This can be perceived as being the language or lingo of the Internet. Many of these acronyms have evolved over time. One of the main reasons that this has become so prolific is due to the use of SMS. SMS is a very restrictive and awkward form of communication. It is restrictive in that it is limited to 160 characters per message and it is awkward, as users have to use a keypad to formulate the message. Often each key is used to key in more than one letter. Predictive messaging, the ability to predict the word from the combination of keys that the user is using, has made the creation of messages easier. Even with predictive messaging, it is the restrictive and cumbersome nature of SMS that has been one of the major contributing factors to Netspeak, since users can reduce the number of keystrokes that are needed to form the message. However, Netspeak has also filtered into the other CMC applications, particularly email and instant messaging since these are areas where users communicate frequently and hastily. Therefore when users want to send a message off quickly, they may add Netspeak vocabulary to it. ...read more.

The repeated use of this new language might result in people losing ability with the English language with regards to spelling and grammar. Also it appears that communicating using the Internet has led some people to become a lot less formal when communicating. However, the Internet has increased the use of the English language, in its NetSpeak form, throughout the world due to the vast majority of Web pages and chat being done in English. Whether the new language has become a new medium for communication remains to be seen. It will not be possible to answer that question for many years to come when we have the benefit of retrospect Previous early changes to the English language came about due to invasion by the Vikings, conquest by the Romans and Normans, French influence (leading to Latin influence). These changes were influenced by the dominant power in the area at certain times forcing their language to be used by the locals/natives. Only aspects of each language were adopted into English which allowed it to evolve from old-English through middle-English to modern-English (Merriam-Webster. 2000). And the next phase, NetEnglish, which has not been brought about by confrontation but instead by the necessity to communicate quickly and meaningfully by people from around the world. The Internet could possibly not affect the English language, the new language could co-exist with it and keep the boundaries between English and NetSpeak. Is this in fact not an evolution of the English language but actually the next phase of "our rapidly evolving, hyper-expressive and quite-expansive human language" (Lain, R. O. ...read more.