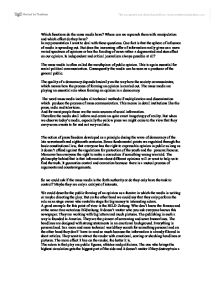 Which functions do the mass media have? Where can we reproach them with manipulation and which effect do they have?

Which functions do the mass media have? Where can we reproach them with manipulation and which effect do they have? In my presentation I want to deal with these questions. One fact is that the sphere of influence of media is spreading out. But does the increasing offer of information really gives us a more varied spectrum of opinions or has the flooding of news rather a degenerated and stun effect on our opinion. Is independent and critical journalism always possible at all? The mass media is often called the mouthpiece of public opinion. This is again essential for social-political communication. Consequently the media can be seen as a producer of the general public. The quality of a democracy depends basically on the way how the society communicates, which means how the process of forming an opinion is carried out. The mass media are playing an essential role when forming an opinion in a democracy. The word mass media includes all technical methods if multiplication and dissemination which produce the process of mass communication. This means in detail institutions like the press, radio and television. And for most people these are the main sources of social information. Therefore the media shall inform and create an quite exact image/copy of reality. But when we observe today's media, especially the yellow press we might come to the view that they carry some events to far and not very realistic. The notion of press freedom developed as a principle during the wave of democracy of the late seventeenth and eighteenth centuries. ...read more.

Berlusconi effectively controls 90 % of the Italian TV market via his family interests in private broadcaster Mediaset and his influence over state-broadcaster RAI in his capacity as Premier. His family holding company Fininvest controls the nation's largest publishing company Mondadori and its biggest film distributor, Medusa, while his brother Paolo runs one of the country's most widely sold newspaper, Il Giornale. Other family interests include an indirect stake in Telecom Italia and a host of other interests. The size of Mr Berlusconi's grip on business and political power prompted protests from left-wing members of the European Parliament last week when the Premier outlined Italy's plans for its presidency of the European Union. For the Berlusconis, expansion into other media areas is banned at present, but if the media bill becomes law, there will be no limit to the number of media any firm can own. So who can defend against such a development? It's an objective fact that for example parties try to have an influence on the media. Some people say that the institutions of the mass media are important to contemporary politics. But do they keep this opinion if this is all handled through one person? In the West elections increasingly focus around television, with the emphasis on spin and marketing. Democratic politics places emphasis on the mass media as a site for democratic demand and the formation of 'public opinion'. The media are seen to empower citizens, and subject government to restraint and redress. ...read more.

More insidiously, it might help to engender a widespread sense of complacency and a diminished capacity to envision potential challenges to the status quo.21 Part of the reason for media's failure to live up to the Fourth Estate Ideal, and one that appears increasingly to be so as media enterprises consolidate into conglomerates with non-media corporate parents, is that media enterprise self-interest and concern for the bottom line pushes coverage to favor commercial interests.22 Media's skewing also grows out of market dictate, both real and perceived. Sensationalism, mainstream worldview, and reporting that focuses on current political leaders and dominant institutions sells better to broader audiences than alternative content.23 Moreover, media exhibit considerable herd behavior, imitating the format of existing commercially successful movies, books, and TV shows, thus exacerbating the homogenized, uniform character of much media content.24 In addition, reporters' dependence on government officials and prominent, well-organized associations for raw material might also vitiate the media's watchdog bite.25 Some commentators claim, indeed, that government officials exert such a powerful, albeit informal, influence on news coverage and thus on public perceptions and debate that the notion of autonomous media production and distribution of ideas is little more than a pipe dream.26 As a result of these factors and others, while the mainstream mass media may often exhibit moderate-reform-oriented norms, it rarely challenges our basic social, economic, and political structures.27 Nor, for better or for worse, does it provide a full spectrum of fathomable expression and opinion. ...read more.