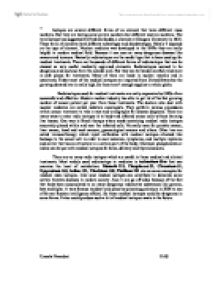 Isotopes Used In Medical Treatments Isotopes are several different forms of an element that have different mass numbers. But they are having same proton numbers but different neutron numbers. The term Isotope has suggested by Fredrick Soddy, a chemist at Glasgow University in 1921. These form of elements have different advantages and disadvantages. Mostly it depends on the type of element. Nuclear medicine was developed in the 1950s they are really helpful in modern medical field. Because it can cure so many dangerous diseases like cancers and tumours. Basically radioisotopes are the useful type that is been used up for medical treatments. ...read more.

So there aren't enough supplies to whole globe. Radioisotopes used for medical treatments are really expensive but 98% of are successful and effective. Modern medical industry has able to get rid of the fast growing number of cancer patient per year from these treatments. The doctors who deal with nuclear medicine are called radiation oncologists. They perform various procedures within cancer treatment to take x-rays and tomography for disease diagnosis. There are many ways to enter radio isotopes in to body and infected cancer cells without harming live tissues. One way is Brach therapy where seeds containing medical radio isotopes accurately placed within and near the infected cells. ...read more.

There are so many radio isotopes which are useful in those medical and clinical treatments. Most widely used radioisotope in medicine is technetium-99m that can examine the level of metabolism. Bismuth-213, Phosphorus-32, Chromium-51, Dysprosium-165, Iodine-131, Ytterbium-169, Thallium-201 etc are some examples for medical radio isotopes. Like wise medical isotopes can contribute to demolish some certain threaten diseases in modern society .Also it can go off sides because of the fact that body been accumulated to so many dangerous radioactive substances like gamma, beta and alpha. A very famous incident took place by poisoning polonium in 2006 to one of former Russian intelligence official. So those medical isotopes could be dangerous in some forms. It also could produce such a lot of medical isotopes waste in the future. Umesha Navodani 11AS ...read more.