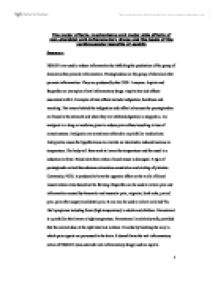 The major effects, mechanisms and major side effects of non-steroidal anti-inflammatory drugs and the basis of the cardiovascular benefits of aspirin

The major effects, mechanisms and major side effects of non-steroidal anti-inflammatory drugs and the basis of the cardiovascular benefits of aspirin Summary: NSAID's are used to reduce inflammation by inhibiting the production of the group of chemicals that promote inflammation. Prostaglandins are the group of chemicals that promote inflammation. They are produced by the COX-1 enzyme. Aspirin and Ibuprofen are examples of anti-inflammatory drugs. Aspirin has side effects associated with it. Examples of side effects include indigestion, heartburn and vomiting. The reason behind the indigestion side effect is because the prostaglandins are found in the stomach and when they are inhibited digestion is stopped as. An analgesic is a drug or medicine given to reduce pain without resulting in loss of consciousness. Analgesics are sometimes referred to as painkiller medications. Antipyretics cause the hypothalamus to override an interleukin-induced increase in temperature. The body will then work to lower the temperature and the result is a reduction in fever. Blood clots form when a blood vessel is damaged. A type of prostaglandin called thromboxane stimulates constriction and clotting of platelets. Conversely, PGI2, is produced to have the opposite effect on the walls of blood vessels where clots should not be forming. ...read more.

Analgesics are sometimes referred to as painkiller medications. There are many different types of analgesic medications available in both prescription and over-the-counter preparations. Examples of analgesic drugs include aspirin, acetaminophen (Tylenol), ibuprofen (Motrin, Advil), naproxen (Aleve, Naprosyn), the COX-2 inhibitor celecoxib, and narcotic drugs including morphine, oxycodone, and hydrocodone (Vicodin). Analgesics may also be combined with other drugs in some types of medications (for example, analgesics are combined with decongestants and/or antihistamine in many over-the-counter cold remedies). Aspirin is used in low doses to prevent heart attacks and blood clot formation in people at high risk for developing blood clot. Aspirin can be bought over the counter without a doctor's prescription. (Spine-Health) Aspirin Because of the high availability of Aspirin, it is one of the most misused drugs. It has several modes of action. It interferes with pain signals to a part of the brain called the Thalamus. Aspirin also irreversibly inhibits chemical mediators of inflammation, which produce pain and further inflammatory reactions. These chemicals are released following tissue and cell damage. In addition, aspirin reduces fever by having an effect on the hypothalamus in the brain, which leads to vasodilation and sweating Side Effects: There a number of side effects associated with taking NSAID's. ...read more.

ibuprofen and diclofenac) is that it won't upset your stomach or cause it to bleed. A Paracetamol overdose is particularly dangerous because the liver damage may not be obvious for four to six days after the drug has been taken. Even if someone who has taken a Paracetamol overdose seems fine and doesn't have any symptoms, it's essential that they are taken to hospital urgently. An overdose of Paracetamol can be fatal. Ibuprofen Ibuprofen can be used to relieve pain and inflammation caused by rheumatic and muscular pain, headaches, migraine, back ache, period (menstrual) pain, pain after surgery and dental pain. It can also be used to relieve cold and 'flu-like' symptoms including fever (high temperature) in adults and children. Ibuprofen works by reducing the effect of irritant chemicals which are produced by the body as a response to inflammation and high temperature. Ibuprofen is available in tablet, oral liquid and effervescent granule form. (Ritter JM. Pharmacology) NSAID's are very useful because they reduce inflammation. They are very common and they are highly used. NSAID's should be used appropriately to avoid side effects and so that the best results can be gained from them. They should not be abused because using them in the incorrect manner will result in more serious diseases. ...read more.