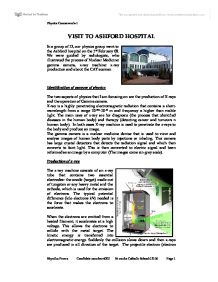 In a group of 12, our physics group went to the Ashford hospital on the 1st February 08. We were guided by radiologists, who illustrated the process of Nuclear Medicine: gamma camera, x-ray machine: x-ray production and about the CAT scanner. 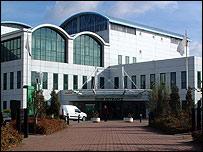 Identification of purpose of physics

The two aspects of physics that I am focusing on are the production of X-rays and the operation of Gamma camera.

X-ray is a highly penetrating electromagnetic radiation that contains a short-wavelength from a range 10-8m-10-11 m and frequency a higher than visible light. The main uses of x-ray are for diagnosis (the process that identified diseases in the human body) and therapy (detecting cancer and tumours n human body).  In both cases X-ray machine is used to penetrate the x-rays to the body and produce an image.

The gamma camera is a nuclear medicine devise that is used to view and analyse images of human body parts by injections or inhaling. This camera has large crystal detectors that detects the radiation signal and which then converts to faint light. This is then converted to electric signal and been reformed as an image by a computer (The images come sin grey scale).

The x-ray machine consists of an x-ray tube that contains two essential electrodes: the anode (target) made out of tungsten or any heavy metal and the cathode, which is used for the emission of electrons. The typical potential difference (kilo electrons kV) needed is the force that makes the electrons to accelerate. 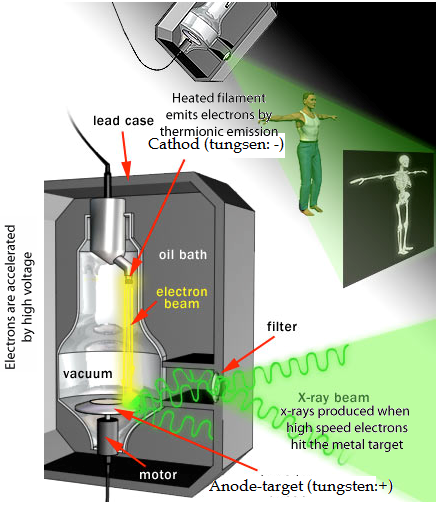 When the electrons are emitted from a heated filament, it accelerates at a high voltage. This allows the electrons to collide with the metal target. The kinetic energy is transferred into electromagnetic energy. Suddenly the collision slows down and then x-rays are produced in all direction of the target.  The projectile electron (electron travelling from the cathode to the anode) interact with the outer shell of the target atom, however sufficient energy is not been transferred to the outer shell, instead they are just raised to an exited level. During the process, about 99% of the kinetic energy is converted to thermal energy and leaving only 1% of the energy to be used for the production. Increase in current will directly increase the production of heat and also increasing Potential Difference will result in more kinetic energy.

If the inner shell rather than the outer shell is interacted with the projectile electron, this produces ‘Characteristic radiation’. The energy loss is released as x-rays. To gain a very efficient x-ray production in material, the atomic number needs to be high. 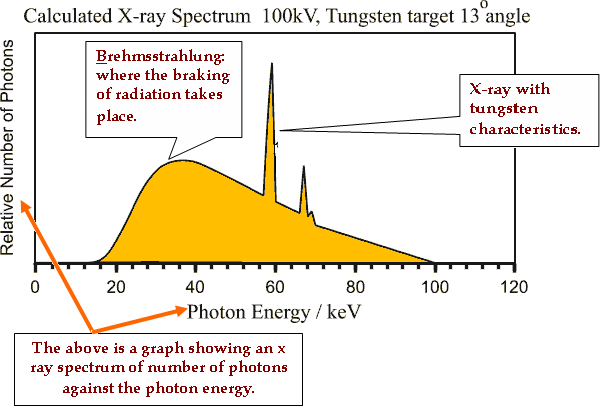 An electron travelling from the cathode gets closer and interacts with the nuclease of the atoms in the anode, which slows them down. This is the ‘Bremsstrahlung’ effect (breaking radiation).

This is a process by which power is lost by radiation as it travels through and interacts with the human body. The x-ray attenuation for human body, takes place is different method including:

Compton Scattering- this occurs when the incident photon is prevented by the original path by an interaction with the electron. Due to this the X-ray photon loses energy but travels continuously in an alert path in the material. 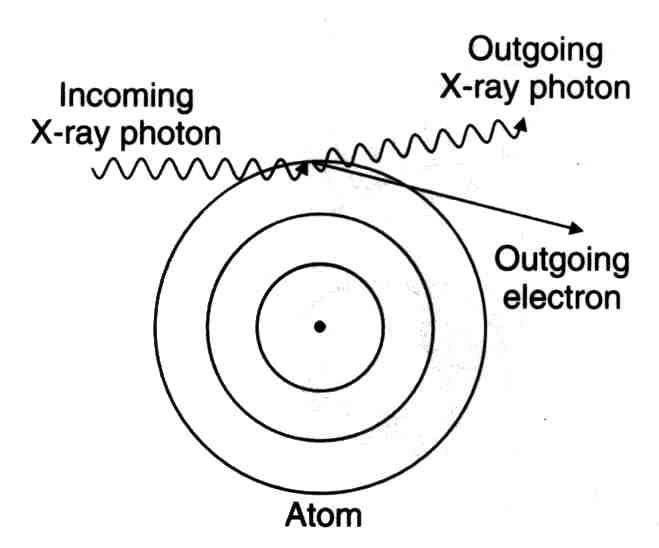 Photoelectric Absorption- the x-ray photon is absorbed which result in the electrons in the outer shell to be discharged. The vacant space that resulted from the discharge is filled by an electron from an outer orbit leaves a space which in turn will be filled by an electron further away from the nuclease I.e. If are the absorber, only light atoms are involved and the Characteristic radiation has a low energy which is absorbed immediately. 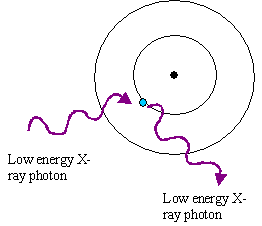 Filters (tubes used for diagnosis) are used to filter lower-energy photons out of the beam because most of these photons are been absorbed by the skin and only few will reach deeper parts of body. However selective filtration will attenuates the exposure of x-ray to patients.

In an X-ray machine the potential difference and the current can be varied for each patient. The cost of the x-ray machines is less than using other type of imaging modalities due to its inexpensive equipments.

Relatively common disorders and diseases in hidden areas can be diagnosed. Thus it has fast and easy imaging characteristics. However even with small doses, it is possible for the cells to be damaged. Therefore is not suitable for detecting any dilemmas in soft tissues (instead denser objects)

X-rays can be developed in two ways:

Dark field images - scattering images can be captured which is much clear and detailed than x-rays. The field ray tissue of x-ray images will show up cancerous tissues.

Finding the wavelength of X-rays

The electromagnetic energy equation is:

From the visit, I observed that the potential difference between the anode and the cathode are between a minimum of 30 eKV and a maximum of 150 eKV. Therefore I choose 45 eKV to find the electromagnetic energy in x-rays.

Once I found the energy, this can be used to find the Frequency of x-rays using the same formulae. (As mentioned above)

This frequency value can be used to find the wavelength (λ) of x-rays using the formulae of wave speed:

X-rays have a wavelength between 10nm to 0.01nm. Therefore the value that I found from the calculation is in this range:

Apart from diagnosis and therapy X-rays can also be used in industries: finding the flow inside processors, air ports: checking on customers and their baggage’s, and by art historians: to see if pictures have been traced. The same theory of x-ray is repeated in these uses because x-rays can penetrate thick material, small cracks or any large machines.