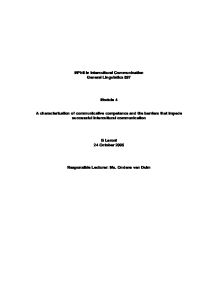 Sympathy therefore involves the communicator applying his personal perspective to understand the experience of others. The use of sympathy with its concomitant emphasis on similar experiences and similar realities has the potential to exacerbate rather than to soothe intercultural conflict situations. This perspective is supported by Bennett (1998:202) who identifies four disadvantages that are associated with sympathy as an intercultural communicative strategy. He says firstly, that sympathy is blind to the differences between people because it focuses on similarity of experience, feeling and thought. Secondly, sympathy can be perceived as patronizing because it assumes a universally applicable experience of reality. Thirdly, sympathy can promote defensiveness because it can be perceived to marginalise the experiences of others who retaliate by defending their values. Fourthly, sympathy perpetuates assumptions of similarity between people thereby reinforcing an ongoing cycle of intercultural misunderstanding. 4.2. Empathy Empathy, in contrast to sympathy, refers to the ability of communicators to "imagine the thoughts and feelings of people from their own perspectives" (Bennett 1998:197). Empathy represents, according to Bennett (1998:207), a communicative strategy that is well suited to intercultural communication because it involves pro-actively taking on the perspectives of others. Bennett (1998:209-212) proposes a six step process for developing empathy. In step 1 the communicator accepts that other people are different as well as the need to understand these differences. Step 2 involves the communicator reflecting on his own principles, values and assumptions so that he does not feel vulnerable to losing his unique sense of perspective. In step 3 the communicator suspends his own identity thereby opening himself to new ideas that extend beyond his familiar experience. Steps 4 and 5 involve the communicator consciously shifting his awareness toward exploring the experience that others have of their reality. ...read more.

The executive, as the most provocative of the parties, could have changed the negative tone of the interaction in four ways. Firstly, he should have accommodated the consultative processes required to support the union delegation's collectivist orientation. Secondly, he should have focussed on understanding the face honouring strategies governing the interaction with the lead official. Thirdly, he should have used more inclusive language. Fourthly, he should have minimised his role in favour of a local executive when it became evident that he could not cope with the African accented English. The conflict that resulted from this interaction could have been avoided if both parties had been more aware of their differences and how these influenced their communicative behaviour. This might have involved a conscious approach to identify and understand the underpinning attitudes and values that were driving their respective communicative behaviours. This could have served as the starting point for developing a more empathetic approach to the negotiation. Such an approach may, for example, have involved a practical intervention to brief the unionists prior to the meeting thereby facilitating their mandate process. By the same token, the union's lead negotiator could have positioned himself closer to and established more eye contact with the executive in order facilitate better decoding of his accented English. 7. Conclusion A key determinant of intercultural communication competence requires that communicators are able to adjust their own expectations of the intercultural interaction whilst simultaneously adjusting their communicative behavior to the expectations of other parties (Ting-Toomey 1999:226-227). This assignment has attempted to characterize the intercultural communicative factors that make this possible. The resultant discussion has examined the criteria and components of intercultural communication, the role of sympathy and empathy in intercultural communication and the barriers that impede intercultural communication. ...read more.