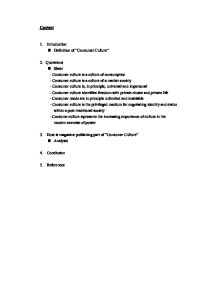 Content 1. Introduction * Definition of "Consumer Culture" 2. Quotations * Slater - Consumer culture is a culture of consumption - Consumer culture is a culture of a market society - Consumer culture is, in principle, universal and impersonal - Consumer culture identifies freedom with private choice and private life - Consumer needs are in principle unlimited and insatiable - Consumer culture is the privileged medium for negotiating identity and status within a post-traditional society - Consume culture represents the increasing importance of culture in the modern exercise of power 3. How is magazine publishing part of "Consumer Culture" * Analysis 4. Conclusion 5. References Introduction - Definition of "Consumer Culture" "Consumer culture" generally refers to the way in which consumption is organized within modern capitalist societies over the modern period, gathering social weight and importance from the eighteenth century onwards, with periods of huge transformation in the twentieth century. To use the term "consumer culture" is to emphasize that the word of goods and their principles of structuration are central to understanding of contemporary society. This involves a dual focus: firstly, on the cultural dimension of the economy, the symbolization and use of material goods as "communicators" not just utilities; and secondly, on the economy of cultural goods, the market principles of supply, demand, capital, accumulation, competition, and monopolization which operate within the sphere of lifestyles, cultural goods and commodities. In Distinction (1984), Bourdieu seeks to map out the social field of the different tastes in legitimated "high" cultural practices, as well as taste in lifestyles and consumption preferences. ...read more.

How is magazine publishing part of "Consumer Culture" Magazine publishing is both a cultural activities and a business. Magazine are vehicles of new idea and sources of entertainment. But the task of bring them into existence and of purveying them to their readers is a commercial one requiring all the resources and skills of the manager and entrepreneur. In this essay I will analyze the teen girls magazines to demonstrate how is magazine publishing part of "consumer culture". - Magazine is a culture of consumption When a reader is consuming a magazine, she is consuming the culture values, ideas, aspirations and identities provided by it. Girls' magazines, such as: "Bliss", "J-17", "Sugar", "Cosmo girl", "Elle girl", are filled with fashion, beauty, styles, music, celebrities, boys and advice. Some of them also campaign on issues and provide a platform for the teen generation to shout from. Since they are popular mainstream magazines that are available in most newsagents, and therefore arguably represent to the readers what constitutes the modern teenage girl. Through reading a magazine aimed at her demographic group, an adolescent girl will gain an insight into the world of the girls and will be taught what are the cultural expectations made of them as girls, she will therefore come to learn that society expects her to be more concerned with her appearance, her relations with other people, and her ability to win approval from boys than with her own ideas or expectations for herself, so magazines are central to society as they create a culture, a culture of femininity, they defines and shapes the girls' world, we can see that it becomes ...read more.

The main issue being, you guessed it, sex.) has been attributed as the cause for this sexier content. The trend has continued with the recent introductions of "Bliss", "Sugar", "Cosmo girl" and "Teen Vogue", etc. Teen magazines nowadays are filled with images of sex and sexuality as well as information about sexual health. Now you can open up any teen magazine and notice the sexual influences. They not only appear in the articles, whose subjects can range from what sex is like, unwed pregnancy, abortion, or how to be sexy, but also in the advertisements placed throughout the magazines. Since teenagers are curious about sex and these magazines seem to be the only way for them to obtain information about it. Therefore, many teen magazines have increased the amount of space focused on sexual-related issues in order to follow what their competitors do, so as to attract more readers. Sex has been packaged as a "commodity" by these magazines in recent years, it marks a new moment in the construction of female sexual identities. Conclusion According to Slater, "consumer culture is a culture of consumption", "consumer culture is a culture of a market society", "consumer culture is, in principle, universal and impersonal", "consumer culture identifies freedom with private choice and private life", "consumer needs are in principle unlimited and insatiable", "consumer culture is the privileged medium for negotiating identity and status within a post-traditional society" and "consume culture represents the increasing importance of culture in the modern exercise of power". From the above analysis, magazine publishing can fit into Slater's descriptions of consumer culture. Therefore, magazine publishing is part of consumer culture. ...read more.