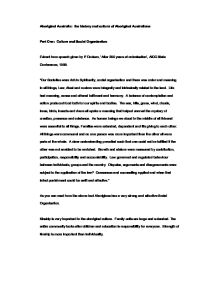 Aboriginal Australia: the history and culture of Aboriginal Australians Part One: Culture and Social Organisation Extract from speech given by P Dodson, 'After 200 years of colonisation', AICC State Conference, 1998. "Our Societies were rich in Spirituality, social organisation and there was order and meaning in all things, Law, ritual and custom were integrally and intrinsically related to the land. Life had meaning, sense and offered fulfilment and harmony. A balance of contemplation and action produced food both for our spirits and bodies. The sea, hills, grass, wind, clouds, trees, birds, insects and rivers all spoke a meaning that helped unravel the mystery of creation, presence and existence. As human beings we stood in the middle of all this and were essential to all things. Families were extended, dependent and life giving to each other. All things were communal and no one person was more important than the other all were parts of the whole. A clear understanding prevailed such that one could not be fulfilled if the other was not enabled to be enriched. Growth and stature were measured by contribution, participation, responsibility and accountability. Law governed and regulated behaviour between individuals, groups and the country. Disputes, arguments and disagreements were subject to the application of the law? ...read more.

Impact of White Settlement Australia The year that would change the lives of Aboriginal Australians forever was 1788. The year of the 'invasion'. White settlers arrived from Britain to colonise a country they considered to be 'Terra Nullus' land belonging to no one. What impact did this have on the Aboriginal Settlement? An impact of astonishing measure. Within the first few months of the arrival of the first fleet, war was declared between the aborigines and the new settlers. The introduction of diseases such as smallpox, leprosy and even the common cold saw much mortality within a very short period of time. The introduction of grazing animals saw the annihilation of forests and bushland that the aboriginals depended on for basic survival. Their environment disappeared before their very eyes. Resistance was only met with more white settlers retaliating with more advanced weaponry which caused on more than one occasion, in fact several, bloody 'massacres'. Population Table* Year Population 1911 30,758 1933 45,066 1947^ 51,048 1966^^ 85,610 1976 160,916 1986 227,645 1991 265,458 ^ - Excludes Torees Strait Islanders ^^ - Includes Part Aboriginals Queensland Queensland's early white settlers indulged in one of the greatest land grabs of all time and encountered fierce Aboriginal opposition. ...read more.

Jurisdiction and laws governing the Aboriginal people Australia as a nation can not undo it's wrongs. There is no time machine to take us back to try and 'fix' what was done. There can be no blame thrown around to try and make white Australians feel more 'at ease' with what the past shows us. It has only been in the last 30 years that the law, policies and way of everyday white Australians thinking is starting to improve. Ignorance plays a major role in the lack of understanding the history and future of the Aboriganal people. One of the most landmark legal proceedings which drew attention from the world regarding Aboriginal land rights was the Mabo decision. This decision put the spotlight back on the Aboriginal lifestyle and changed the law giving for the first time in post white settlement a glimmer of possibilities. Terra Nullius was declared no more. This opened the way for land to be reclaimed by Aborigines. Right now there is a case involving land rights up at The Glasshouse Mountains which has halted the development of a million dollar estate that was planned. In conclusion, the Aboriginals today in the Australian society are still not heard. Their presence not felt and their lives a distant blur on the horizon. Only in the last week has our Prime Minister seen it fit to shut down a large part of the Aboriginal voice by closing ATSIC. ...read more.