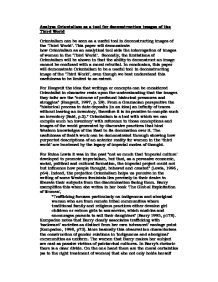 Analyse Orientalism as a tool for deconstruction images of the Third World.

Analyse Orientalism as a tool for deconstruction images of the Third World Orientalism can be seen as a useful tool in deconstructing images of the 'Third World'. This paper will demonstrate how Orientalism as an analytical tool aids the interrogation of images of women in the 'Third World'. Secondly, the limitations of Orientalism will be shown in that the ability to deconstruct an image cannot be confused with a moral rebuttal. In conclusion, this paper will demonstrate Orientalism to be a useful tool in deconstructing image of the 'Third World', even though we best understand this usefulness to be limited to an extent. For Hoogvelt the idea that writings or concepts can be considered Orientalist in character rests upon the understanding that the images they infer are the "outcome of profound historical pressures and struggles" (Hoogvelt, 1997, p. 29). From a Gramscian perspective the "historical process to date deposits [in an idea] an infinity of traces without leaving an inventory, therefore it is imperative to compile such an inventory (Said, p.2)." Orientalism is a tool with which we can compile such 'an inventory' with reference to those conceptions and images of the world generated by discursive practices that bind Western knowledges of the East to its domination over it. ...read more.

Liddle and Rai contend that the workings of orientalist power are "invoked discursively when male oppression and female resistance are characterized in such a way as to reinforce a 'hierarchy of civilization'" (Chu, 2001, p2). When in the early twentieth century Europeans complained brazenly "the Japanese worker is hardly willing to submit himself to the military discipline which according to our standards must rule the modern factory" (Iwabuchi, 2003, p.1) Orientalism was clear. It is similarly present in frustrated NGOs who complain of the "negative role that traditional culture played in 'blocking' development" (Hoogvelt, 1997, p.30). It is much more subtle in these feminist discourses but the image of women in the 'Third World' can be deconstructed using Orientalism to reveal traces of imperialist conceptions of the world nonetheless. For Jack Donnelly, however, to do so in such instances is tantamount to a dangerous kind of moral relativism (Donnelly, 1999). He attacks statements made by writers such as Lee Manwoo who argues that, "different civilizations or societies have different conceptions of human well-being. Hence, they have a different attitude toward human rights." (Manwoo, 1997, p.131) For Donnelly writers such as Barry and Feldt are articulating views that ought not to be seen as signs of "disrespect but of disagreement" (Donnelly, 1999, p60). ...read more.

then the limitations of it are profound. It can more profitably be seen to show the difficulties inherent in talking about another part of the world. This difficulty is amplified by the particular historical circumstances that will necessarily impact upon our view of the world as Orientalism, understood properly, reveals. Horner argues that China's encounters "with the Islamic parts of the post-colonial world" display "another Orientalism" (Horner, 2001, p1). "Secular radicalism informed both Chinese strategic ambitions in Southeast Asia and," he argues, "Indonesia's own internal political vocabulary" (2002, p2). In this Horner takes Orientalism to mean a particular historically developed set of traces on the 'inventory' of an idea. For Horner Orientalism enables him to better understand China and its relations to the Islamic world. Rightly, however, these observations are not argued in a moralistic manner. Orientalism is a useful tool in deconstructing images of the 'Third World'. Orientalism as an analytical tool aids the interrogation of images of women in the 'Third World'. We best understand this usefulness to be limited. Orientalism is a good means of interrogating an idea. To do so may at times undermine viewpoints articulated against a perceived 'moral' wrong (as was seen in Barry's writing). Of itself, however, Orientalism is not a useful tool in building ethical frameworks or new approaches to development issues. ...read more.