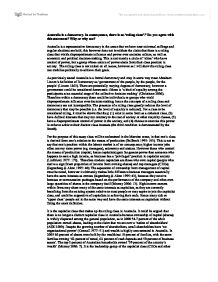 Australia is a democracy. In consequence, there is no ruling class. Do you agree with this statement? Why or why not?

Australia is a democracy. In consequence, there is no 'ruling class'." Do you agree with this statement? Why or why not? Australia is a representative democracy in the sense that we have near universal suffrage and regular elections are held, this however does not invalidate the claim that there is a ruling class that wields disproportionate influence and power over societies culture, as well as economic and political decision-making. This is not merely a circle of 'elites' who have control of power, but a group whose source of power stems from their class position in society. The ruling class is not united on all issues, however as I will show the ruling class can mobilise politically to achieve their goals. As previously stated Australia is a formal democracy and may in some way meet Abraham Lincon's definition of Democracy as 'government of the people, by the people, for the people' (Lincon 1863). There are potentially varying degrees of democracy, however a government could be considered democratic if there is 'a kind of equality among the participants at an essential stage of the collective decision making' (Christiano 2006). Therefore within a democracy there could be individuals or groups who wield disproportionate influence over decision-making; hence the concepts of a ruling class and democracy are not incompatible. The presence of a ruling class greatly reduces the level of democracy that may be possible (i.e. the level of equality is reduced). For a class to be considered ruling, it must be shown that they; (1) exist in some form as a coherent class, (2) have defined interests that may run contrary to the rest of society or other majority classes, (3) ...read more.

Rule implies 'collective domination, [and] the maintenance of an institutional structure within which the class appropriates benefits' (Connell 1977: 58). The capitalist class does this in several ways. Firstly by controlling the means of production (capital), they in effect control most economic decision-making (Jagtenberg & Alton 1995: 41), not in the sense of choosing budget outlays or setting interest rates but in what goods/servides are produced and the methods of production (within the constraints imposed by consumer tastes and effective demand). They are also able to exercise control over the workplace, how it is organised and working conditions. Capitalists have this power because capital in our society is the scarcest input of production. Individual workers, no matters how skilled need their employers far more than their employers need them, as workers do not own capital. If a nation were to be called a true 'democracy' then one would assume that there would be economic democracy, at least in some form. However in its common usage democracy usually refers to liberal democracy where most decisions concerning the economy ('the institution that organises the production, distribution and exchange of goods and services') (Furze et al 2008: 561) are seen as outside the jurisdiction of the state, instead being left up to the 'invisible hand' of the market. It is then assumed that decisions that fall within the jurisdiction of the state will be 'democratic' in sense, however the ruling class can influence state decision making. Before going further the class interests of capitalists must be explained. On the most basic level it is to maintain the institution of private property (which allows control of capital), to accumulate capital and 'defending the social order which affords them privileges' (Connell 1977: 42). ...read more.

does not overturn the entirety of 'Workchoices', instead maintaining many elements such as exemption to unfair dismissal laws and limits on the right to strike (Coorey 2008) has prompted many to dismiss it as 'Workchoices light' (Skourdoumbis, Questions raised over ongoing relevance of unions 2008). This shows the extent to which the ruling class has been able to exert their influence over a popularly elected government, despite Australia being a 'democracy'. This could possibly be due to limitations placed on government by business (Lindblom 1977) Class has historically been (Connell & Irving 1992) and is currently an important factor in Australian society (Jagtenberg & Alton 1995: 39). In modern Australian society capitalists can be seen at the top of the class system and are Australia's ruling class, despite it being a 'democracy'. Various attempts to explain the concentration of power in Australia society in terms of elites (Higley 1979 et al, Encel 1970) fail to acknowledge its structural causes (Frankel 1998) and that wealth is a 'social category inseparable from power' (Heilbroner 1985). This is not to say that there are no 'elites' who may or may not support ruling class action (eg union leaders, public academics) just that there is an identifiable class (capitalists) who hold the majority of power in society, not left wing intellectuals as some have advocated (Flint 2003). There are other elements to power in Australian society (eg gender or race) and there are many cases where a ruling class theory fails to explain elements of Australian politics, however on a class level Australian society is structured in such a way as to give power to capitalists who ultimately seek to maintain this situation and have succeeded in doing so. The lack of discussion or even acknowledgement of the situation impedes democracy and prevents thoughtful public discourse on how our nation should be governed. ...read more.