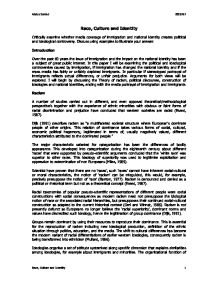 Race, Culture and Identity Critically examine whether media coverage of immigration and national identity creates political and ideological controversy. Discuss using examples to illustrate your answer. Introduction Over the past 60 years the issue of immigration and the impact on the national identity has been a subject of great public interest. In this paper I will be examining the political and ideological controversies caused by immigration, if immigration has changed the national identity and if the mass media has fairly or unfairly depicted immigrants. In particular if stereotyped portrayal of immigrants reflects actual differences, or unfair prejudice. Arguments for both views will be explored. I will begin by discussing the Theory of racism, political discourses, construction of ideologies and national identities, ending with the media portrayal of immigration and immigrants Racism A number of studies carried out in different, and even opposed theoretical/methodological perspective's together with the experience of ethnic minorities with obvious or faint forms of racial discrimination and prejudice have concluded that western societies are racist (Essed, 1987). Dijk (1991) describes racism as "a multifaceted societal structure where European's dominate people of other origins. This relation of dominance takes various forms of social, cultural, economic political hegemony, legitimated in terms of, usually negatively valued, different characteristics attributed to the dominated people." The major characteristic selected for categorization has been the differences of bodily appearance. This developed into categorization during the eighteenth century about different 'races' that were supported by pseudo-scientific arguments concluded that the 'white race' was superior to other races. This ideology of superiority was used to legitimise exploitation and oppression to extermination of non Europeans (Miles, 1989). Scientist have proven that there are no 'races', such 'races' cannot have inherent social-cultural or moral characteristics, the notion of 'racism' can be misguided, this would, for example, precisely presuppose the notion of 'race' (Banton, 1977). Racism is denounced and denied as a political or rhetorical term but not as a theoretical concept (Essed, 1987). ...read more.

Such statements were common and helped to push back the questions about integration of minorities onto to the agenda. Furthermore, this aided those who questioned the viability of an ethnically plural society. The Rushdie affair is seen as the precursor of a series of controversies that shaped ideas on race and ethnic relations (Bhatt, 1997). New Labour New Labour debated the issue of what it means to be British, and started to define a new sense of patriotism at the same time linking national identity to the ever growing multicultural society. One example of trying to make this link was by Robin Cook: 'Chicken tikka masala is now Britain's true national dish because it is a perfect illustration of the way Britain absorbs and adapts external influences' (Evening Standard, 19 April 2001). This was an attempt to popularise the idea that the national identity is able to assimilate other cultures. Following the 2001 riots, attacks on 9/11 and 7/7, there was a shift in political language on race relations and immigration. With the perpetrators of the London Bombings, themselves born in England of immigrant families, the issue of integration continued to hit the headlines. David Blunkett introduced strict immigration controls while arguing in favour of multiculturalism. In 2005 the 'life in the UK test' was implemented whilst completely ignoring the link between Norman Tebbit's Cricket test. Mathew Taylor argued that policies relating to multiculturalism were constructing a 'consenting apartheid', this was a reference to areas where there was little or no contact between minorities and majorities (Guardian, 4 December 2001). Media Hartmann (1974) argues, historically the media perpetuate negative perceptions of immigrants, and define the situation as one inter group conflict, heavily imbued with the significance of colour, that leads to an active collusion with racist definitions. Definitions of newsworthy events are determined by powerful professional, organizational routines, and social ideologies (Gans, 1979). During the 1980's, several cities in the UK with a predominantly immigrant population experienced civil unrest. ...read more.