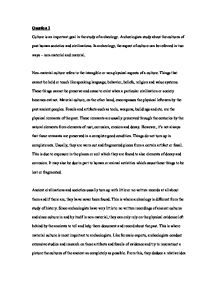 Culture is an important goal in the study of archeology. Archeologists study about the cultures of past human societies and civilizations. In archeology, the aspect of culture can be referred in twoways - non-material and material.

Question 2 Culture is an important goal in the study of archeology. Archeologists study about the cultures of past human societies and civilizations. In archeology, the aspect of culture can be referred in two ways - non-material and material. Non-material culture refers to the intangible or non-physical aspects of a culture. Things that cannot be held or touch like speaking language, behavior, beliefs, religion and value systems. These things cannot be preserve and cease to exist when a particular civilization or society becomes extinct. Material culture, on the other hand, encompasses the physical leftovers by the past ancient peoples. Fossils and artifacts such as tools, weapons, buildings and etc. are the physical remnants of the past. These remnants are usually preserved through the centuries by the natural elements from elements of rust, corrosion, erosion and decay. ...read more.

This is where material culture is most important to archeologists. Like forensic experts, archeologists conduct extensive studies and research on these artifacts and fossils of evidence and try to reconstruct a picture the cultures of the ancient as completely as possible. From this, they deduce a relative idea of the culture, lifestyles of these ancient civilizations. Things like statues and buildings from the past give a general idea or picture of how the people might look and dress physically and how they might have lived or work. They also might give an insight to their beliefs and religions. Movies like Indiana Jones often give people the false impression that archeology is adventurous treasure hunting in far off exotic places. That was how archeology started out in the past. People were more concerned in great findings of exotic and beautiful artifacts and structures. ...read more.

Though non-material culture has a minor contribution to the study and research of archeologists, it still however has its use in the understanding of past human societies. Observations of modern populations in their habits, behaviors, technologies or tools sometimes help to link physical clues to past ancient societies. Archeologists sometimes 'borrow' modern cultures to interpret past cultures based on the artifacts they find. Ultimately, however, in the study of archeology it still provides us with nothing more than an approximation of the things and cultures of the distant and ancient past. That is why ancient cultures and civilizations continue to be define and redefine by discoveries of new and important artifacts and fossils. Then again, however vague or inaccurate it may be, it gives us an idea about how people live and work, their technologies and achievements in the past. It helps us understand the remarkable diversity and uniqueness of the human race even in the ancient past. (Word count: 736) ...read more.