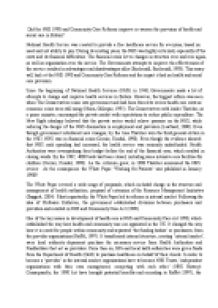 Did the NHS 1990 and Community Care Reforms improve or worsen the provision of health and social care in Britain?

﻿Did the NHS 1990 and Community Care Reforms improve or worsen the provision of health and social care in Britain? National Health Service was created to provide a free healthcare service for everyone, based on need and not ability to pay. During its existing years, the NHS was highly criticized, especially of the costs and its financial difficulties. The financial crisis let to changes in structure over and over again, as well as organization over the service. The Governments attempts to improve the effectiveness of the service resulted in advantages and disadvantages alike (Birchenall, Birchenall, 1998). This essay will look at the NHS 1990 and Community Care Reforms and the impact it had on health and social care provision. Since the beginning of National Health Services (NHS) in 1948, Governments made a lot of attempts to change and improve health services in Britain. However, the biggest reform was seen when The Conservatives came into government and had been forced to review health care costs as economic crisis were still rising (Moon, Gillespie, 1995). The Conservatives with leader Thatcher, as a prime minister, encouraged the private market with expectations to reduce public expenditure. ...read more.

Consequantly, the 1990 Act have brought potential benefits and according to Raffet (1997), the 1990 Act ?consitutes the most controversial and far ? reaching set of reforms yet undertaking?. From then on, the purchaser could choose a better value deal as well as recognize who was providing what services and the Health Authorities baed the purchase of service on the assess of needs of population which could possible lead to greater health services (Leathard, 2000). However, the internal market revealed comlexity and drawbacks. Firstly, it was claimed that more public money been used to buy private services while purchasers disharged hopsital patients to community earlier in a bid to save some money, which made clear that internal market unlikely to survive without extra funding (Leathard, 2000). Hospital and Community Services could no longer rely on annual budget and had to compete with each other in business that lead to financial dificulties (Pollock, Talbot ? Smith, McNakky, 2006). As a result 1990-1994, the 245 hospitals were closed in Engalnd and Wales. As well as this, studies have proved that competition in the market may actually have had a negative impact on the quality of care provision. ...read more.