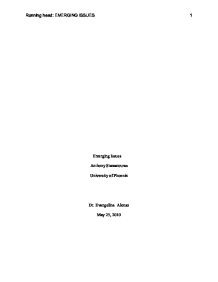 Emerging Issues. In as much as the mobility of the world's peoples has become a common occurrence, cultures are being put together with other cultures that are very much different. The areas of life that were once governed by the agents of socialization t

Emerging Issues Anthony Stamatouras University of Phoenix Dr. Evangelina Alonso May 25, 2010 Emerging Issues In as much as the mobility of the world's peoples has become a common occurrence, cultures are being put together with other cultures that are very much different. The areas of life that were once governed by the agents of socialization that are culturally specific such as schools, family, and churches, are now seen competing for the socialization of those that are moving to different countries to pursue financial betterment. Those people from what are considered poor countries are migrating to America, as well as other countries viewed as a means by which to better and individuals (Schaefer, 2007). It is now important for social psychologists to study the effect of the crossover of the cultures in order to understand methods of alleviating the "normal cognitive process" (Weiten, p 457, 2007) of stereotyping that leads to intolerance for the ideals exhibited by those from cultures other than the one in which the inclusion occurred. ...read more.

Another example is the often rampant conflict between those of American born inhabitants and Mexican born immigrants. However, both sides have historically stereotyped and presented biased and prejudiced actions against African-Americans (Schaeffer, 2007). Furthermore, this stereotyping is not only in America. The fact that many cultural stereotypes exist around the world that is based on gender rather than culture alone is shown by studies in Granada publicized by a study that was carried out by Soledad de Lemus Mart�n and directed by Miguel Moya Morales and Juan Lupi��ez Castillo, professors of the Department of Social Psychology and Behavioral Sciences Methodology and Experimental Psychology and Behavioral Physiology (Castillo, 2008). In addition, in Britain, stereotyping of cultural issues are abundant as reported by Jade Mag (2005) regarding Asian women: "The most popular is the lotus blossom: he poor helpless Asian female waiting for a strong white man to come save her from the evils of the world, especially the horrible Asian men" (Mag, 2005). ...read more.

Research further shows that this Asian American universal academic success myth is quite prominent. This fact causes them emotional distress and create conflicts with their peers, both those of different races and those in their own racial group. Even more important, stereotyping limits students' opportunities and access to resources (Fisher, Wallace, & Fenton, 2000). Besides Asians, this paper also forced me to think about how post-9/11 tensions caused me to think differently, often with bias toward Muslims. To me, this group faces the most bias and discrimination, not just in America, but also globally, due to September 11th and the various wars and terror acts globally. Although I have colleagues and friends now who are Muslim, I was initially very skeptical when going on a plane or bus because of the news stereotypes and fear tactics used by the media. These issues enabled culturally diverse individuals to have a better understanding and acceptance for each other and trying to decrease the damage that stereotypes can cause. Ignorance and hatred based on assumptions and discrimination divides the people, understanding and appreciation of all the unique differences unites them. ...read more.