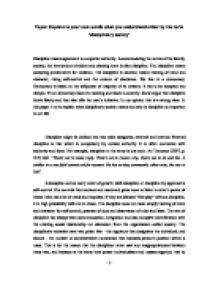 Topic: Explain in your own words what you understand either by the term 'disciplinary society' Discipline means agreement to a superior authority. Accommodating the norms of the family, society, the instructions of elders and obeying them is also discipline. Yet, discipline means accepting punishments for violation. The discipline in addition means training of mind and character, rising self-control and the custom of obedience. We live in a democracy. Democracy is based on the willpower of majority of its citizens. It has to be accepted and obeyed. If not democracy loses its meaning and leads to anarchy. Some argue that discipline limits liberty and that also kills the man's initiative. In my opinion this is a wrong view. In this paper I try to explain what disciplinary society means and why is discipline so important in our life. Discipline might be divided into two wide categories, external and internal. External discipline is that which is compulsory by outside authority. It is often connected with authority and force. For example, discipline in the army is one such. As Tennyson (2007, p. 215) said "Theirs not to make reply. Theirs not to reason why, theirs nut to do and die. A soldier in a war field cannot ask for reasons. He has to obey commands; otherwise, the war is lost". Indiscipline cannot carry order of growth. ...read more.

Machinery comes into this world sort of like anonymity. Most people just experiment and see what works. Humanity uses the new machinery not as a belonging just to get by, but as an instrument to those who use it. In addition to machines technical function of increasing the productivity of labor, machinery also has in the capitalist system the function of divesting the mass of workers of their control over their own labor. In the course of a life, an individual passes linearly into and out of these various institutions (from the school to the barracks to the factory) and is formed by them. Each institution has its own rules of subjectivities: "School tells us: 'You're not at home! The army tells us: 'You're not in school anymore." (Johnson 2010, p. 11) The relation between inside and outside is essential to the functioning of the modern institutions. In effect, the clearly delimited place of the institutions is reflected in the regular and permanent form of the subjectivities produced. In fact, the social institutions produce prejudice in an ever more intense way. The walls of the institutions are breaking down so that inside and outside become impossible to differentiate Each contemporary social formation is related together as part of the imperial design. Those who are clamoring today for a new constitution of civil society as the vehicle for the transition from either socialist States or despotic regimes are "merely nostalgic for ...read more.

A suitable and reasonable balance has to be wedged between liberty and discipline. In conclusion, I want to say that in my opinion discipline is the basis of the whole universe. The discipline is a basic requirement of a civilized society. Citizens of the disciplinary societies work with a strength of cooperation and harmony. "Discipline is obedience to rules formed by the society for the good of all"(O'Neil 1986, p. 11). Liberty is much cherished and mush valued advantage in our society. But absolute liberty is not possible. The discipline involves a control on liberty, which is necessary for the interest of society. Discipline has been found essential for both individual and social interests. The discipline is not only desirable but obligatory. All over the place where the discipline and regulation of human conduct are absent, the moral and material deterioration has set in. Absence of discipline often means decay. To prevent the decay, discipline has to be compulsory in the common interest and for the common good. Sources: 1. Foucault M, (2000). "The Subject and Power". In Power The Essential Works of Michel Foucault 1954-1984. Volume Three. New Press: New York 2. Johnson T, (2010). Future society. Social Science Press: El Cajon 3. Munro J, (2002). Empire: the coming of the control society. Ephemera: Phoenix 4. O'Neil J, (1986). "The disciplinary society from Weber to Foucault", The British Journal of Sociology. London 5. Tonnyson A, (2007) Selected Poems: Tennyson (Penguin Classics), XVI editions, Penguin Group: London ?? ?? ?? ?? - 1 - ...read more.