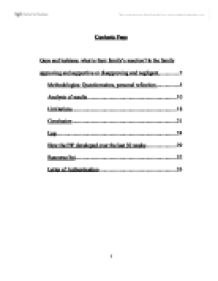 Gays and lesbians: what is their family's reaction? Is the family approving and supportive or disapproving and negligent

Contents Page Gays and lesbians: what is their family's reaction? Is the family approving and supportive or disapproving and negligent. 2 Methodologies: Questionnaires, personal reflection. 5 Analysis of results 10 Limitations 18 Conclusion 21 Log 24 How the PIP developed over the last 30 weeks 29 Resource list 32 Letter of Authentication 33 Gays and lesbians: what is their family's reaction? Is the family approving and supportive or disapproving and negligent. Being born into an Indian family, family has always played a large role in my development as an individual. Especially in the Indian culture society places a lot of stress on an ideal family having the male play an ideal role of a 'son' in the family; being male it is expected we carry on the family business as well as the name. Being born in Singapore, a country where gays and lesbians are condemned by society as well as by the law, for homosexual individuals in such an environment they can never be open about their true identity. However, upon my arrival in Australia I was amazed to be living in an environment where people are more accepting towards gays and lesbians, and there openness towards the 'gay/lesbian; community. Through my study I hope to answer my main question which is, what is the family's reactions towards their children's rather controversial lifestyle and choice of gender roles? Follow up questions that I hope to answer throughout my research are, at what age did their family find out that they were gay/lesbian? Has their role as an individual in the family changed because of their gender preference? What was the reaction of the immediate family (siblings) as well as the extended family (uncles, aunts, grandparents) Till today in my family we have not experienced having a gay or lesbian individual, therefore the cross-cultural aspect of my study will allow me to learn and experience contrasting views and feelings towards gays/lesbians. ...read more.

Therefore it was harder to attain specific information on my chosen topic. June- Being familiar with my topic I had to now start developing on attaining more information as well as start thinking about producing a primary research method from which I was able to gather information for my topic. During this month I visited many frequent haunts of gays mainly oxford street as well as rang up gay organizations hoping to gather relevant information July - the hardest month for my PIP as primary research had to be conducted therefore much of the last week was taken up conducting questionnaires at Oxford Street. Through the analyzing of the questionnaires I became more aware of my topic. August- carried on with conducting questionnaires in Oxford Street, knowing what to expect I was more prepared. Being more prepared benefited me whilst conducting the questionnaires was able to meet my target of 30 questionnaires. September- as all the parts of my PIP had been submitted carried on with more readings to make attain a greater understanding of my chosen topic. During this period I called a few individuals for interviews however none were successful. October- The first two weeks were spent editing the PIP as a whole and coming up with a conclusion. November- During the period I spent most of my time editing and making small adjustments to my P.I.P no new information was added. Resource list Broughton, J (2003, August 11) Coping with your child's sexuality. www.schoolzone.co.uk/teachers_jft/timeout/homefamily/Copingwithyourchild Farrer, S (2004, June 10). Gay parents unsuited. Sydney Star Observer Howitt B, Julian R. (2002). Society and culture. Heinamann: Australia Lovat, T (2000). New Society and Culture. Social Science Press: Australia Marcus, E (2000). What If Someone I Know Is Gay. Penguin Putnam: U.S.A pp. 54~57. Ng, J (2000, August 11). My Son Is Gay: New Straits Times pp. 12 Neuman, L (1999). Social research methods. Allyn and Bacon: U.S.A Personal and Social identity (2004). The Social and Cultural world. Study guide pp. 19~23 Robert, B (2000) Straight Parents Gay Children: Inspiring Families to Live Honestly and with Greater Understanding. Peguin Putnam: U.S. ...read more.