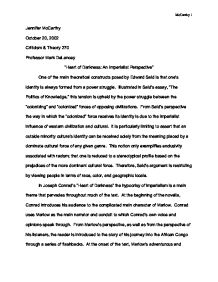 Jennifer McCarthy October 20, 2002 Criticism & Theory 270 Professor Mark DeLancey "Heart of Darkness: An Imperialist Perspective" One of the main theoretical constructs posed by Edward Said is that one's identity is always formed from a power struggle. Illustrated in Said's essay, "The Politics of Knowledge," this tension is upheld by the power struggle between the "colonizing" and "colonized" forces of opposing civilizations. From Said's perspective the way in which the "colonized" force receives its identity is due to the imperialist influence of western civilization and cultural. It is particularly limiting to assert that an outside minority culture's identity can be received solely from the meaning placed by a dominate cultural force of any given genre. This notion only exemplifies exclusivity associated with racism; that one is reduced to a stereotypical profile based on the prejudices of the more dominant cultural force. Therefore, Said's argument is restricting by viewing people in terms of race, color, and geographic locale. In Joseph Conrad's "Heart of Darkness" the hypocrisy of imperialism is a main theme that pervades throughout much of the text. At the beginning of the novella, Conrad introduces his audience to the complicated main character of Marlow. Conrad uses Marlow as the main narrator and conduit to which Conrad's own voice and opinions speak through. ...read more.

Again, the geographic location is used as a reason why men of bravery and honor turn to savage actions. The fact that they are in the Congo and away from civilization is used as an excuse for their savage behavior. As expressed by Said, the way in which the "colonized" force obtains its identity is through a power-struggle with the "colonizing force. Illustrated in the following quotation, "What interests me in the politics of identity that informed imperialism in its global phase is that just as natives were considered to belong to a different category - racist or geographical -from that of the Western white man, it also became true that in the great anti-imperialist revolt represented by decolonization this same category was mobilized around, and formed the resisting identity of, the revolutionaries" (Said, p. 192). Informed in this idea is the notion that in order for these two ideas to coexist, they are mutually dependent on each other for the preservation of separate and distinct cultural institutions. Therefore, the revolutionary forces gained their identity only through uprisings with the dominant cultural force that threatened to engulf them. While this is an interesting theory posed by Said, it fails to expand on the concept of where the dominant cultural force receives its own identity. ...read more.

28). Marlow's ideas evolve once he realizes that he has been living a lie; the true reality he has existed within has become the false reality. The idea that the colonizing forces of civilization give the colonized culture its identity through a power struggle is limiting in two ways. First, it is incredibly naive to believe that before a struggle between two opposing civilizations took place, the less dominant culture lacked any distinct traditions, customs, and beliefs. As observed by Marlow in "Heart of Darkness", this presupposition is a false reality because the natives of the African Congo displayed far more humane qualities and distinct traditions than their oppressors. The second concept here is that once members of the dominant Western culture were extracted from their comfort zone of prejudices and falsities, they began to display qualities the savages were to possess. This paradox of true versus false reality pervades throughout much of "Heart of Darkness", where the light of imperialism is overshadowed by the darkness of the greedy actions of the explorers who enter the Congo. Therefore, the notion that all homogeneous races and identities arise from the dominance imposed by imperialism begins to break down. The fact that a person's characteristics are static and unchanging is proven false by the fact that the African Congo changed everyone who dared to enter. McCarthy 5 ...read more.