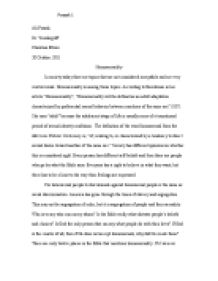 ﻿Prazak Ali Prazak Dr. Vandergriff Christian Ethics 20 October 2011 Homosexuality In society today there are topics that are not considered acceptable and are very controversial. Homosexuality is among those topics. According to Barnhouse in her article ?Homosexuality?, ?Homosexuality will be defined as an adult adaptation characterized by preferential sexual behavior between members of the same sex? (107). She uses ?adult? because the adolescent stage of life is usually more of a transitional period of sexual identity confusion. The definition of the word homosexual from the Merriam Webster Dictionary is, ?of, relating to, or characterized by a tendency to direct sexual desire toward another of the same sex.? Society has different opinions on whether this is considered right. Every person has different self-beliefs and then there are people who go by what the Bible says. Everyone has a right to believe in what they want, but there has to be a limit to the way their feelings are expressed. For hetersexual people to discriminate against homosexual people is the same as racial discrimination. America has gone through the times of slavery and segregation. This may not be segregation of color, but it is segregation of people and their sexuality. Who is to say who can marry whom? Is the Bible really what dictates people?s beliefs and choices? Is God the only person that can say what people do with their lives? If God is the creator of all, then if He does not accept homosexuals, why did He create them? There are only twelve places in the Bible that mentions homosexuality. If it were so controversial in society you would think that there would be more to go from in the Bible than only twelve mentions. ...read more.

If there is supposed to be no such thing as hate, then how can anyone in a religious community show their dislike or hatred for homosexuals? In Lev. 18:22 homosexuality is said to be an ?abomination?. In 1 Cor. 6:9-10 it says, ?Or do you not know that the unrighteous shall not inherit the kingdom of God? Do not be deceived; neither fornicators, nor idolaters, nor adulterers, nor effeminate, nor homosexuals, nor thieves, nor the covetous, nor drunkards, nor revilers, nor swindlers, shall inherit the kingdom of God.? If this list is a list of sins and homosexuality is not called a sin, then should homosexuality really be in this list? They have not hurt or deceived anyone. I do not think that there is a big difference between homosexual tendencies and homosexual behavior. Homosexual tendencies are feelings that one might think they are having for the same sex, but no actions are taken. Homosexual behavior is the action that that is taken toward another person of the same sex. Homosexual tendencies are accepted, but homosexual behavior and homosexuality in itself is looked down upon. According to Christians the feelings or tendencies of someone struggling with their sexuality should be recognized but no actions should be taken toward another person. (Ball) I also think that if you are homosexual you should be able to show that, you should not have to hide it. One should not have to get rid of their homosexuality especially if a person is born with it. I disagree with the Christian opinion that a person becomes homosexual because of society and therefore has to psychologically get rid of whatever moment made them homosexual. ...read more.