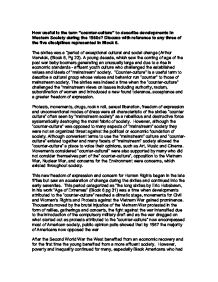 How useful is the term &quot;counter-culture&quot; to describe developments in Western Society during the 1960s? Discuss with reference to any three of the five disciplines represented in Block 6.

How useful is the term "counter-culture" to describe developments in Western Society during the 1960s? Discuss with reference to any three of the five disciplines represented in Block 6. The sixties was a "period of exceptional cultural and social change (Arthur Marwick, (Block 6, Pg 23). A young decade, which saw the coming of age of the post war baby boomers generating an unusually large and due to a rise in economic standards - affluent youth culture who challenged the established values and ideals of "mainstream" society. "Counter-culture" is a useful term to describe a cultural group whose values and behavior run "counter" to those of mainstream society. The sixties was indeed a time when the "counter-culture" challenged the "mainstream views on issues including authority, racism, subordination of women and introduced a new found tolerance, acceptance and a greater freedom of expression. Protests, movements, drugs, rock n roll, sexual liberation, freedom of expression and unconventional modes of dress were all characteristic of the sixties "counter culture" often seen by "mainstream society" as a rebellious and destructive force systematically destroying the moral fabric of society. However, although the "counter-culture" was opposed to many aspects of "mainstream" society they were not an organized threat against the political or economic foundation of society. Although convenient terms to use the "mainstream" culture and "counter-culture" existed together and many facets of "mainstream" society allowed the "counter-culture" a place to voice their opinions, such as Art, Music and Cinema. ...read more.

With its strong ties to youth culture much of the music of the sixties had strong elements of rebellion and anti establishment potential but there was no real rebellion against society, more an outlet for teenage expression. "Mainstream" music continued to thrive and more traditional styles of music co-existed along side new sounds, musicians such as Bob Dylan helped bring about a folk music revival and the Civil Rights movement adopted Dylan's, radical lyrics of "Blowin in the Wind", while Dylan's "The times they are a-Changing" gives us a sense of the mood of the decade. Many changes in popular music in the mid sixties were caused in part by the drug scene, Acid Rock and the more mellow psychedelic rock gained prominence, while the musical phenomenon of Woodstock Festival gathered together 400,000 young people in a spirit of love, peace, and LSD. 1967 saw "The Summer of Love" when mass celebrations in San Francisco caused the "counter-culture scene to gain momentum, drug experimentation and unconventional lifestyles continued to contributed to the vibrant music scene. Jim Haynes, a leading figure in 'counter-cultural' activities explained that: "Young people suddenly had an important voice; they were being listened to, followed even. 'What we were doing in the colourful clothes and long hair in the sixties was telling everybody that we were tolerant, we were all having fun" An opinion echoed by Maureen Nolan and Roma Singleton in "Mini-Renaissance" (Resource Book 4, Page 25), ...read more.

who became involved with the drug and "counter-culture" turned to these new religions in order to gain some control over their lives. Some saw the New Religious Movements as 'adaptive and integrative, rehabilitating dropped and retraining them to enter back into society. To sum up there was no single counter culture but several movements which posed challenges to "mainstream society" I agree to a degree with Ray Davis of the pop group the Kinks who said "that the so-called "Freedom of the Sixties was a myth, that the so-called "counter-culture" never really infiltrated society and that the establishment continued to rule" (Block 6, pg 175) I agree that the establishment did continue to rule and that the sixties did not witness a political or economic revolution but it had great impact on personal and social life . In his autobiography Jim Haynes', 'Thanks for Coming!' shows the deflation felt by many at the end of the sixties. He says 'the end of the sixties came as an incredible collapse [...[we weren't going to change the world. We could only maybe change ourselves a bit. And I think that this resulted in a depression.' (Resource Book 4, page 24) I think this shows that many involved in the "counter-culture movements felt they were trying to change the world and its thanks to their "disanchantment with mainstream culture that has allowed future generations new freedoms in morality; tolerance, equality and acceptance. (Word 1810) ...read more.