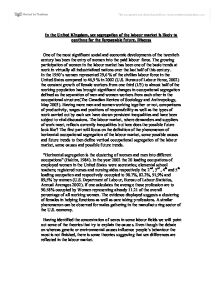 In the United Kingdom, sex segregation of the labour market is likely to continue for the foreseeable future. Discuss

In the United Kingdom, sex segregation of the labour market is likely to continue for the foreseeable future. Discuss One of the most significant social and economic developments of the twentieth century has been the entry of women into the paid labour force. The growing participation of women in the labour market has been one of the basic trends at work in virtually all industrialized nations over the last half of this century. In the 1950's women represented 29,6 % of the civilian labour force in the United States compared to 46,9 % in 2002 (U.S. Bureau of Labour Force, 2002) the constant growth of female workers from one third (1/3) to almost half of the working population has brought significant changes in occupational segregation defined as the separation of men and women workers from each other in the occupational structure(The Canadian Review of Sociology and Anthropology, May 2003). Having more men and women working together or not, comparisons of productivity, wages and positions of responsibility as well as the types of work carried out by each sex have shown persistent inequalities and have been subject to vital discussions. The labour market, where demanders and suppliers of work meet, reflects currently inequalities but how does the possible future look like? The first part will focus on the definition of the phenomenon of horizontal occupational segregation of the labour market, some possible causes and future trends to then define vertical occupational segregation of the labour market, some causes and possible future trends. ...read more.

Segregation, in the stricter, narrower sense, is regarded as evidence of inequality; it is also sometimes referred to as vertical segregation. "Vertical occupational segregation exists when men and women both work in the same job categories, but men commonly do the more skilled, responsible or better paid work." (Hakim, 1984). For example the majority of school heads may be men while the majority of teachers are women, the majority of hospital consultants may be men while the majority of nurses may be women. The assumption made in 1984 seems especially remaining true at the senior management level "only two women in the Fortune 500 hold the title CEO: Carleton S. Fiorina of Hewlett and Packard and Andrea Jung of Avon Products( Catalyst women, 2003)". In 1987 the idea of the "glass ceiling," the invisible barrier that prevents women and minorities from advancing to higher levels in organizations, was introduced by Morrison, White, & Van Velsor.( Morrison, A. M., White, R. P., & Van Velsor, E.; 1987). But is glass ceiling about to break and the notion of vertical segregation outdated? Possible causes to vertical segregation are diverse such as institutional barriers, discrimination and patriarchal organised societies. Most causes are based on social arrangements that gave birth to today's occupational structure. In male dominated organisations for example the perception of "good leadership" is related to male values. ...read more.

Inequalities in wages and positions of responsibilities should decrease especially in highly horizontally segregated labour markets a movements towards equality may be observed. If most of teachers in a school are female it seems today naturally that the head of school may also be a women. Nevertheless not all reasons for vertical and horizontal occupational segregation have been identified and the wider theme of segregation in the labour market in the foreseeable future will persistently be topic to discussion. Most of the sources used as statistics and journals are of American nature this may lead to false generalisation. References Al Swanson (June 2003). Numbers help women break glass ceiling. United Press International, p1008153w9605 Annelies E.M. van Vianen; Agneta H. Fischer (September 2002). Illuminating the glass ceiling: the role of organizational culture preferences. Journal of Occupational and Organizational Psychology, volume 75 issue 3 p315(23) Baron-Cohen, S. (2003). Essential Difference: Male and Female Minds and the Riddle of Autism. Allen Lane Science Douglas Baer (May 2003). Substitution or Segregation? The Impact of Changes in Employment, Production and Product on Gender Composition. The Canadian Review of Sociology and Anthropology, volume 40 issue 2 p197(17) Hakim, C. ( December 1994). A century of change in occupational segregation 1891-1991. Journal of Historical Sociology, Vol 7 pp 435-454 Morrison, A. M., White, R. P., & Van Velsor, E. (1987). Breaking the glass ceiling: Can women reach the top of America's largest corporations? Reading, MA: Addison-Wesle cited in Annelies E.M. van Vianen; Agneta H. Fischer (September 2002). ...read more.