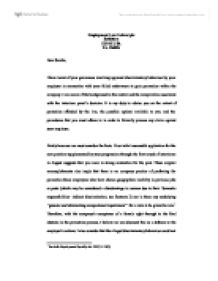 Employment Law Ireland plc Solicitors 123 DCU St. Co. Dublin Dear Sorcha, I have learnt of your grievances involving apparent discriminatory behaviour by your employer in connection with your failed endeavours to gain promotion within the company. I am aware of the background to this matter and the complexities associated with the interview panel's decision. It is my duty to advise you on the extent of protection afforded by the law, the possible options available to you and the procedures that you must adhere to in order to formally process any claim against your employer. Firstly however we must consider the facts. Your initial successful application for the new position supplemented by your progression through the first round of interviews in August suggests that you were in strong contention for the post. These original accomplishments also imply that there is no company practice of preferring for promotion those employees who have shown geographical mobility in previous jobs or posts (which may be considered a disadvantage to women due to their 'domestic responsibilities- indirect discrimination, see footnote 2) nor is there any underlying "genuine and determining occupational requirement" for a male to be given the role.1 Therefore, with the company's acceptance of a female right through to the final obstacle in the promotion process, I believe we can discount this as a defence to the employer's actions. I also consider that the alleged discriminatory behaviour could not be deemed as indirect.2 Given your four years experience with the company and your superior qualifications, I am of the opinion that you have been the victim of direct discrimination, which is generally unjustifiable when proven (Article 235 of the EEC Treaty, allowing for Member States to have final say in particular case);3 on the grounds of gender (pregnancy is now considered a limb of gender discrimination which I will discuss shortly)4. Connolly defines direct discrimination as: "In its simplest form, direct discrimination arises when a defendant expressly links the victim's protected characteristic (say, sex, or race) ...read more.

The Equality Officer in the recent hearing of Lane v. MBNA41 - a case that encompassed similar circumstances to those incurred by you - decided to award the complainant �17,000 for the gender discrimination suffered, and in doing so illustrated the likelihood of your claim succeeding in the present climate. I would also draw striking similarities between your situation and that of the claimant in Pamella Scott v. Deborah Costello42. In this case the employee had also progressed through the preliminary stages of a promotion procedure only for her second interview to be cancelled having made it known to her employer that she had become pregnant. Ms. Costello was permitted to recover compensation in respect of the employer breaching both the Equal Treatment Directive43 and sections 6(2) and 8 of the Employment Equality Acts 1998-2004. Just like in this case, your interview was effectively (but not literally) 'cancelled' once the interview panel became aware of your pregnancy (the thought process of the interviewing panel was irrevocably contaminated from this point onwards); the only difference being that the employer knew of this fact before the interview was allowed to take place rather than during it in your case. As you can see, your case is by no means unique. In fact the Equality Authority revealed that it receives roughly 300 complaints (10% of all Equality authority casework files under the Employment Equality Acts) relating to pregnancy discrimination every year.44 Authority CEO Niall Crowley reveals that the Labour Court is intent on "sending out a strong unequivocal message"45 that such discrimination will not be tolerated. Having ascertained the protection afforded to you by the law and disclosing to you the relevant case-law that will provide authenticity to your claim, it is necessary that we consider the options available to you in formally processing the claim. I must firstly remind you that you are entitled by law to request and receive a rationalization of events from your employer's perspective.46 It is open to the Company to refuse ...read more.