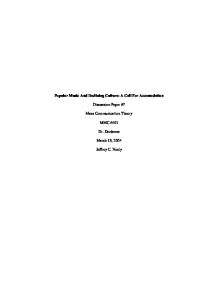 Popular Music And Declining Culture: A Call For Accomodation.

Popular Music And Declining Culture: A Call For Accomodation Discussion Paper #7 Mass Communication Theory MMC 6401 Dr. Dardenne March 18, 2004 Jeffrey C. Neely The ideas behind high culture, social order, knowledge of familiarity versus formal knowledge, perceptions of our environment, maturity, and significance all center around one broad, yet inescapable foundation, truth. While it sounds trite and clich� to say that the human experience is validated through the quest for truth, it is nevertheless, I believe, the core underlying motivation in discussions of social commentary. The readings for this week spanned across a number of diverse topics, but also centered around a certain theme of social construction, or social evolution. In his essay, "Culture and Anarchy," Mathew Arnold emphasizes a connection between culture and governed social order. Arnold, who seems to have little objection to coming off as a priggish elitist, suggests that human survival, stability, and flourishing requires the defense of a cultural aristocracy who will protect the society from the infiltration of the Populace into politics, and thus anarchy and social destruction. Leavis takes up this challenge in his essay, "Mass Civilisation and Minority Culture" by advocating a return to specialization as opposed to standardization, and a persistence to communicate with future generations in light of the pessimism of cultural recovery in an industrial age. ...read more.

The last two selections for reading in the Storey text (the first by Hall and Whannel, the second by Gilroy) both pay particular attention to a specific component of popular culture, popular music. It should, of course, be understood that in this sense we are not referring to a modern genre, but rather a greater category of music for the masses. The essay from Hall and Whannel points out how popular music has had a trend of pandering to a young audience who is over-eager for easily digestible content. In contrast, Gilroy points out how popular music, particularly soul music, has been used in the past for communicating significant political ideas. While perhaps idealistic and offering less actual solutions than inspiring catchy choruses, soul music has been highly contributive in the movement of African-American Civil Rights. It is to this area of modern popular music that I would like to discuss. While I believe that too much emphasis of "high-culture" can be ultimately detrimental to an elevated human society, I also believe that too little can be equally detrimental. My objective will be to examine the necessity for thoughtful expression in music, while avoiding the snobbish pitfalls of cultural condescension. It seems to me that the new millennium has brought about very little in the way of significantly contributing popular music. ...read more.

is the manifestation of absolutes, or simply necessary in facilitating social evolution, it is imperative that it not be abandoned. I am more optimistic than Arnold and Leavis, in that I believe that the masses can learn to appreciate to a degree the value of good-culture. It is for this reason that I believe that popular music should be recognized for its tremendous potential of communicating good taste. I do not believe that one has to water down good-culture in order for it to be received by the masses. I simply believe that the ideas behind good-culture must be communicated in a non-pedantic way so that the society as a whole can understand the necessity of virtue. Furthermore, we really have no choice. Because of the powerful influence that the masses now have, if we desire to preserve good-culture at all, it will no longer do to simply give the answer, "Because I said so." We must explain why virtue is better. We must, as Hall and Whannell state, "alert them to the severe limitations and the ephemeral quality of music which is so formula dominated and so directly attuned to the standards set by the commercial market." Cultural aristocracy is going out the window, which I believe is a good thing, but the challenge now is to provide a baseline level of cultural awareness that will empower the people to choose the good for themselves. ...read more.