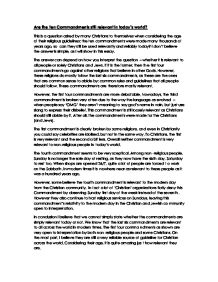 Are the Ten Commandments still relevant in today's world? This is a question asked by many Christians to themselves when considering the age of their religious guidelines: the ten commandments were made many thousands of years ago, so can they still be used relevantly and reliably today? I don't believe the answer is simple, as I will show in this essay. The answer can depend on how you interpret the question - whether it is relevant to all people or solely Christians and Jews. If it is the former, then the first four commandments go against other religions that believe in other Gods. ...read more.

However they also continue to host religious services on Sundays, leaving this commandment's relativity to the modern day in the Christian and Jewish community open to interpretation. In conclusion I believe that we cannot simply state whether the commandments are simply relevant today or not. We know that the last six commandments are relevant to all across the world in modern times. The first four commandments as shown are very open to interpretation by both non-religious people and some Christians. On the most part, I believe they are still a very reliable source of guideline for Christian across the world. Considering their age, it is quite amazing just how relevant they are. Freddie Preece 4L ...read more.