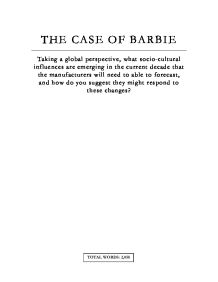 THE CASE OF BARBIE

THE CASE OF BARBIE Taking a global perspective, what socio-cultural influences are emerging in the current decade that the manufacturers will need to able to forecast, and how do you suggest they might respond to these changes? EXECUTIVE SUMMARY Globalization is popularly described as the absence of border and barriers to trade between nations (ohmae, 1995), but also has been viewed as shifts in traditional patterns of international production, investment, and trade (Dicken, 1992), and as interconnection between overlapping interest of business and society (Brown 1992; Renesch, 1992). The differences of opinion about any aspect of globalization are a matter of perspective. Globalization sources can be technological, economical, political, cultural and environmental. PEST examining Political, Economical, Socio-cultural and Technological categories into which external influences on the organization can be placed. These are the levels at which the influences occur alongside the PEST categories. The levels are Local, National and Global (Long). The third level describes as global affecting all part of the world in similar and simultaneous ways. The global issues also affect the local and national level of an organization. Culture plays important part in growing at international level of the external environment. Following are the obvious illustration of cross culture issues: Language, Behavior & Culture Shock. The most important illustration of culture is language. When operating in another culture, language plays an important part. Barbie has often been used to promote different names in different times for e.g. twist & turn Barbie, Talking Barbie, Crystal Barbie, Sweet sixteen Barbie, Crystal Barbie etc. can be a good names in one culture but can carry a different meaning & image of Barbie. ...read more.

Likewise Vauxhall Nova, General Motors' 1980 mini hatchback, was branded Opel Corsa in the rest of Europe as 'Nova' which was meant to have connotations of new actually translates as 'does not go' in many European languages.2 Barbie has often been used to promote different names in different times for e.g. twist & turn Barbie, Talking Barbie, Crystal Barbie, Sweet sixteen Barbie, Crystal Barbie etc. can be a good names in one culture but can carry a different meaning & image of Barbie. As the transition or choice of words meaning other things in different languages is not the only skill required overseas. The important thing is saying the right word in the target language or the word should represent a right word in other languages. II. BEHAVIOR Second important illustration of culture is behavior. For example, consumption of alcohol in Muslim states and of beef in India, where the cow is sacred to Hindus. There are some cultures in which physical contact between the different sexes or people of the same sex is an issue. For example, in many Middle East and far eastern cultures, any touching between the sexes is unacceptable and in some countries a girl having a boy friend is also not considered good. As from the beginning, Barbie had her critics, from feminists and others, has been that she reinforces sexism, representing a young woman with questionable intelligence and a near-impossible physique. Barbie is sold around the world in the original blonde-haired, blue-eyed version along with international Barbie such as Kenyan Barbie, Polynesian Barbie, spring time in Tokyo Barbie (has black hair), etc. ...read more.

The Long PEST analysis study of Political, Economic, Socio-cultural and Technological on local, national and global level provides a useful starting point to the analysis of environment surrounding an organization. Manufacturer of Barbie doll should think about the culture and country before launching of new model of Barbie in any country. This is due to the name, image associated with Barbie as a glamorous girl. The culture of different countries does not accept Barbie doll with the same glamorous girl as she has been throughout her life. Therefore manufacturer have to change the image of Barbie in launching globally to different part of the world. As in some part of the world people see her as villainous destroyer of young girl's self images and she is often said to be promoting Americanization cultures. Although Barbie represent different images and manufacturer are working hard with different images of Barbie. Following factors are important in understanding the emerging global socio-cultural affect: * Manufacturers of Barbie need to think about different names of the Barbie which can carry a good meaning according to the culture of that country. * Manufacturers of Barbie also need to consider different culture values in different countries and need to think about the dress, clothes she wears. * Finally manufacturers of Barbie also need to change the physique which is not realistic. 5. REFERECES Books: * Parker,B. (1998) Globalization and business Practice, SAGE publication limited * Capon,C.(2000) Understanding Organisational Context, Prentice Hall Europe Electronic Sources: * Barbie, life in plastic, http://www.economist.com (accessed on, 30th November, 2005) * Barbie pushed aside in Mideast cultural shift, http://www.iht.com (accessed on, 30th November, 2005) * Barbie around the world, http://www.ru.org/barbie.htm (accessed on, 30th November, 2005) TOTAL WORD COUNT: 2,058 words 6. ...read more.