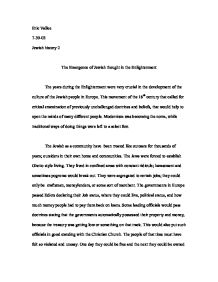 The Emergence of Jewish thought in the Enlightenment

Eric Vallee 7-30-03 Jewish history 2 The Emergence of Jewish thought in the Enlightenment The years during the Enlightenment were very crucial in the development of the culture of the Jewish people in Europe. This movement of the 18th century that called for critical examination of previously unchallenged doctrines and beliefs, that would help to open the minds of many different people. Modernism was becoming the norm, while traditional ways of doing things were left to a select few. The Jewish as a community have been treated like outcasts for thousands of years; outsiders in their own home and communities. The Jews were forced to establish Ghetto style living. They lived in confined areas with constant ridicule; harassment and sometimes pogroms would break out. They were segregated to certain jobs; they could only be craftsmen, moneylenders, or some sort of merchant. The governments in Europe passed Edicts declaring their Job status, where they could live, political status, and how much money people had to pay them back on loans. Some leading officials would pass doctrines stating that the governments automatically possessed their property and money, because the treasury was getting low or something on that track. This would also put such officials in good standing with the Christian Church. ...read more.

Granting equal opportunities and dignity they would prove to be resourceful and loyal subjects. Thus leading to the conclusion that the removal of these negative conditions would render the Jews less 'harmful' and prepare them for a gradual increase of rights and improved conditions 'if and when they may deserve them'. This treatise was closely followed by the Edict of Tolerance (1782) issued by the emperor of Austria, Joseph II. This provided for the civic betterment of the Jews in exchange for a change in their cultural values and institutions. However, what is implicit in these assertions is the use that the Jew can be to the state. There is no recognition of civic parity, or, most importantly, his humanity. The suggestion that Jewish greediness, and a whole host of other unsavory character traits, was the logical consequence of Christian persecution was a view that was becoming widely accepted among the intellectual French elite. Rather the finger of blame is directed towards the Christian attitudes for producing the cultural backwardness of the Jews. Therefore Judaism was not disparaged, but the conditions which produced it where. Were then, in regards to Judaism, did the Jewish intellectuals stand? Was it Christian attitudes, which prevented the Jew from becoming assimilated with his Gentile counter part, or was it the shadow appearance of Judaism which kept the Jew chained to his pariah status? ...read more.

With the lifting of this state of siege the accumulated customs of centuries became exposed to the rational analysis of the science of 'reason'. The Haskalah movement aimed to prepare Judaism for a new challenge; the challenge of becoming citizens instead of pariahs. They viewed with concern the concentration of Jews in trade and commerce, to the typical life of the Jewish student, which was devoid of any concern for a future livelihood. To the ceremonial life of the ghetto which had become laden with all sorts of bizarre customs, rites and superstitions that had lost all meaning and significance. To these cosmopolitans Jews the embarrassing charges of obscurantism and superstition from their Gentile contemporaries rang perfectly true in their ears. In order to revitalize an ailing culture it was necessary to hack away at the ancient roots of Judaism, which were threatening the very survival of the entity it was meant to preserve. The Haskalah movement was acknowledging a primary law of nature: an organism, which fails to respond and adapt to a changing environment that will perish. Moses Mendelson, and the concerned reformers who preceded and followed him, charted a course for the reinvigoration of the Jewish people in the turbulent years of the 19th Century, preparing them for the role of citizen instead of the accustomed role of pariah. ...read more.