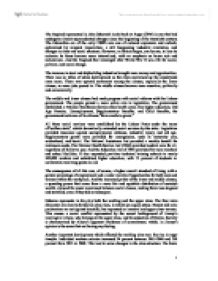 The England represented in John Osborne's Look Back in Anger (1956) is one that had undergone almost unprecedented changes since the beginning of the twentieth century.

The England represented in John Osborne's Look Back in Anger (1956) is one that had undergone almost unprecedented changes since the beginning of the twentieth century. The Edwardian era of the early 1900's was one of outward expansion and outlook, epitomized by rampant imperialism, a still burgeoning industrial revolution, and changes in class and social structure. However, as Britain began, one by one, to lose its colonies its focus became more internalized, with an emphasis on home rule and nationalism. And the England that immerged after World War II was rife for social, political, and moral change. The increase in steel and shipbuilding industries brought more money and opportunities. There was an influx of urban development as the cities swallowed up the countryside even more. There was upward movement among the classes, especially the lower classes, as more jobs poured in. The middle classes became more assertive, politically and economically. The middle and lower classes had made progress with social reforms with the Labour government. The people gained a more active role in legislation. The government established a National Healthcare Service (free health care), free higher education, Old Age Pension, Unemployment, Supplementary Benefits, and Child Benefits; the government took care of its citizens "from cradle to grave." All these social services were established by the Labour Party under the name of"welfare state", which dramatically extended social services by the state. ...read more.

The biggest achievement of this act, however, was its abolition of a required payment in order for a student to be able to attend grammar school. No longer were the middle and upper class students the only ones that could afford an education. Secondary education saw great expansions as well in the post-war years. More universities sprang up during this time due to the large numbers of students seeking a college education. Along with increased affluence for all classes came an higher education for everybody. This is evident in Look Back in Anger within Jimmy. He is a lower-class man, who is well-read, and quite understanding of what is going on in society. Higher education was changing the realms of literature. Authors were writing to a more educated public. Literature changed to satisfy this higher-educated audience that better understood the dynamics of society compared to generations of the past. This young people of the 50's, who belonged to working class families and who attended University, were finding themselves questioning, and often rejecting, what they felt were the staid and stifling Victorian morals and morays of previous generations. They longed for a "looser" society, free from any restraints upon morals, dress, language, gender roles, or expectations. And apparently they were "angry"- those working and middle-class young men who, although often university-educated at state expense, and despite colossal strides in upward mobility, still felt discontented and disillusioned with their continued inability to gain entrance into the restricted power circles of British politics, education, criticism, or literature. ...read more.

Capitalism produced a sense of a classless society in which people were not divided into classes because they were not even persons, but objects. Serious Money presents a society on the edge of apocalypse. This degenaration of society is present from the prologue, taken from Shadwell�s The Stockjobber, which also brings in a historical perspective. The comparison with Restoration Comedy not only implies that fraud is inherent in the system, but also serves as a measure of the difference between past and present. Where Shadwell�s Jobber are a despised under-class, whose only objective is make money, people who lives nowadays, in the present, still have the same desires. Bad has become worse; and this downward progress accelerates within the play. The Characters in the play are mere objects, unidimensional people who lack almost any introspection. Thus the only alternative is mutual exploitation, as personal relationships no longer exists and morality is just imagery. If Look Back in Anger explores the situation of the classes within the British society of the fifties, Serious Money, talks about the consequences of that situation. It is trying to make us aware of the fact that this society, where the working man does not longer feel himself a member of a deprived group which should fight for its rights, and where the upper classes has changed Imperialism for Capitalism, exploiting the working class, has no future, or even worse, it suggests a terrible future in which human relationships will be replaced by economic and power relationships. ...read more.