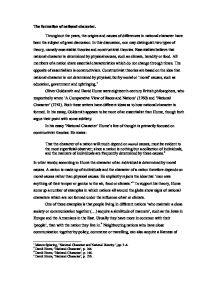 The formation of national character.

The formation of national character. Throughout the years, the origins and causes of differences in national character have been the subject of great discussion. In this discussion, one may distinguish two types of theory, namely essentialist theories and constructivist theories. Essentialists believe that national character is determined by physical causes, such as climate, heredity or food. All members of a nation share essential characteristics which do not change through times. The opposite of essentialism is constructivism. Constructivist theories are based on the idea that national character is not determined by physical, but by social or 'moral' causes, such as education, government and upbringing.1 Oliver Goldsmith and David Hume were eighteenth-century British philosophers, who respectively wrote 'A Comparative View of Races and Nations' (1760) and 'National Character' (1741). Both these writers have different ideas as to how national character is formed. In his essay, Goldsmith appears to be more of an essentialist than Hume, though both argue their point with some subtlety. In his essay 'National Character' Hume's line of thought is primarily focused on constructivist theories. He states: That the character of a nation will much depend on moral causes, must be evident to the most superficial observer; since a nation is nothing but a ...read more.

The fact is, the English do not have one type of government. Actually, their government is a mixture of aristocracy, monarchy and democracy. Hume says: 'The great liberty and independency which every man enjoys, allows him to display the manners peculiar to him. This is the reason why the English have the least of a national character.' In other words, people 'choose' whom they imitate and because the people of England do not have one particular superior to follow, their characters differ within the nation. 8 Hume also gives an explanation for the fact that the manners of a people can change. This is usually 'due to alterations in government, by mixtures of new people or by that inconstancy to which all human affairs are subject.'9 In another part of his essay, Hume again stresses the impact of the government: 'A very extensive government (...) established for many centuries (...) spreads a national character over the whole empire.'. China, or rather the Chinese thus have the greatest uniformity of character imaginable, whereas in small governments the people usually have a different character and are often as different in nature as the most distant nations.10 Hume also states that 'the same national character commonly follows the authority ...read more.

He argues against physical causes by illustrating that two specific societies in the same geographical conditions may have highly diverse characteristics and also that two societies in different geographical conditions may have similar characteristics. He puts a vast emphasis on the impact of government on the formation of national character and explains that the English show such a mixture of manners and character, because of their mixed government. Goldsmith on the other hand, seems to be torn between two views. He ascribes some aspects of national characteristics to physical causes, such as the superiority of the Europeans, which he ascribes to the equal division of population over the country. In the case of the English however, he states that their manners, dispositions and turn of thinking are induced partly by government, which is a moral cause, and partly by the climate or the soil, which are physical factors. Because Goldsmith considers both these causes as factors which influence national character, it would not be right to pigeonhole him as a true essentialist. However, it is fair to say that out of the two philosophers, Oliver Goldsmith's theory and views are most inclined towards essentialism. ...read more.