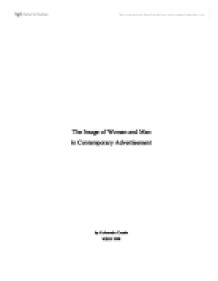 the image of woman and man in advertisement

The Image of Woman and Man in Contemporary Advertisement by Aleksandra Czoska WSHE 2008 ''Advertising may be described as the science of arresting the human intelligence long enough to get money from it'', said Stephen Leacock. He probably stated an undisputable truth as we now see our world full of advertisements everywhere we are and everywhere we go. Advertising invites us into a world of appearances, constructed by verbal and visual symbols used to associate these images with specific. To do it advertisers had to ''marry the product with something everyone, or almost everyone, thought of and wanted-sex'', where in a male-dominated industry, sex was eqaul with women. When female bodies started popping up in ads ''feminists cried foul'' because of ''women's stereotyped and objectified images'' Modern advertising is an annual multi-billion Dollar business in United States of America. Advertising is everywhere - on television, in magazines, in cinemas, on countless web pages, on trains and even on milk-cartons. In fact, advertisements are so common in our times that we do not even realize we are looking at them anymore. They try to reach not only our mailboxes, but also our minds and in doing so, they contribute to the image we shape of women and men in our culture. The debate, whether the portrayal of woman and man in advertising is a serious or overrated issue, has been enduring for quite some time and the final answer may never be found. ...read more.

Lukas comments, "Women's bodies are objectified in common ways. In the case of many popular ads, the objectification of the woman occurs through the association of her being with her breasts." Here it becomes clear on where the alleged problems come in. Women may only be depicted with parts of their bodies, like their legs or their chests, while men usually have their faces shown. If both genders have faces, the male usually looks at the camera, while the female often looks another way. Some opinions seem to suggest that this makes us observers or voyeurs when it comes to the female, while we process the male face as something or somebody we can relate to. Lukas wrote on his website that, "When men and women appear in ads together, the women are often depicted as weaker than the male, either through composition of the ad or particular situations in the scene" .Women often have their heads or faces covered or seem to have their mouths closed most of the time, while males have them open. This might suggests that the viewer does not need to care what the woman has to say, as long as she looks good. This is the more subtle approach in the objectification of women. The more obvious objectification is apparent when women's bodies are representing a product, for example a bottle of perfume or beer in the shape of a woman's body. ...read more.

This is probably resulting of the increase of capitalism in our attitude, where money and the advantages it brings -as fashion and beauty- take an important place in the social construction of the new man. The images of masculinity in TV ads are not monolithic and static, but rather diverse and changing. The traditional man, representation of the patriarchal order, is being challenged by a new nan image. This new man is characterized by a rupture of the respectful father-son relationship, looking for freedom to express its emotions and with liberty to selfexpression, and self-satisfaction. It is also the joker card as it plays in situations where the traditional man cannot fit. This study concentrated on stereotypes associated with women and man in advertisements. The images of Man are changing, and the new man has arrived to stay. It is challenging the old traditional man with new trends and images as it is by now more represented in the TV ads. This challenge to patriarchal order does not mean a rupture with a male-dominated industry as women remain under represented and in submissive positions. Further research should look at the impact of this whole era of Fashion, Beauty and Money in the consumption behaviour to evaluate how far the advertisements can control our lives. While this research examined current portrayal of women in television commercials, there are still many areas which have not been studied. While stereotyping exists and is pervasive in our media we do not know if it is pervasive in other countries. Little research has been done studying the stereotypes in other parts of the world. Future research could investigate this possibility. ...read more.