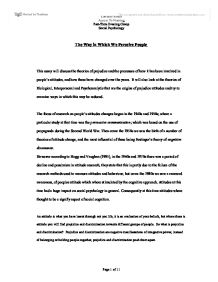 The Way in Which We Perceive People

The Way in Which We Perceive People This essay will discuss the theories of prejudice and the processes of how it has been involved in people's attitudes, and how these have changed over the years. It will also look at the theories of Biological, Interpersonal and Psychoanalytic that are the origins of prejudice attitudes and try to examine ways in which this may be reduced. The focus of research on people's attitudes changes began in the 1940s and 1950s; where a particular study at that time was the persuasive communication; which was based on the use of propaganda during the Second World War. Then come the 1950s we saw the birth of a number of theories of attitude change, and the most influential of these being Festinger's theory of cognitive dissonance. However according to Hogg and Vaughan (1995), in the 1960s and 1970s there was a period of decline and pessimism in attitude research, they state that this is partly due to the failure of the research methods used to measure attitudes and behaviour, but come the 1980s we saw a renewed awareness, of peoples attitude which where stimulated by the cognitive approach, attitudes at this time had a huge impact on social psychology in general. Consequently at this time attitudes where thought to be a signify aspect of social cognition. An attitude is what you have learnt through out you life, it is an evaluation of your beliefs, but where there is attitude you will find prejudice and discrimination towards different groups of people. So what is prejudice and discrimination? Prejudice and discrimination are negative manifestations of integrative power, instead of belonging or holding people together, prejudice and discrimination push them apart. ...read more.

This study illustrates a case of discrimination because hotel managers were acting on their prejudiced views of Native people. While most provinces have laws (human rights legislation) aimed at preventing discrimination, these laws do not try to change people's attitudes. They only try to stop them from hurting people because of these attitudes. � This study is similar to one conducted by the Canadian civil Liberties Association which asked for rooms in the names of Mr. Greenberg (a Jewish name) and Mr. Lockwood. The results were similar, but 36% offered accommodation to Mr. Greenberg compared with 20% to Mr. Little Bear. Sigmund Freud's revolutionary ideas have set the standard for modern psychoanalysis in which students of psychology can learn from his ideas spread from the field of medicine to daily living. Freud's studies in the areas such as unconsciousness, dreams, sexuality, the Oedipus complex, and sexual maladjustments laid the foundation for future studies. In result, better understanding of the small things, which shape our lives (Jung). Psychoanalysis is the name of a procedure for the investigation of mental processes that are almost inaccessible in any other way, a method (based upon that investigation) for the treatment of neurotic disorders and a collection of psychological information obtained along these lines, which is gradually being accumulated into new scientific discipline (Freud). Psychoanalysis a theory of and therapy for the mental disorders known as neuroses, and a general theory of personality and emotional development constructed almost entirely by Freud. This theory is one to one, over an extended period, and investigates the interaction between the conscious and, by free association of ideas, the unconscious mind and bringing to light repressed fears and conflicts. ...read more.

Ignorance is the biggest reason for why we form prejudices in the first place. If we think back to the fifties and sixties, the amount of prejudice and racial discrimination has been reduced dramatically. However, as much as society tries to stress the importance of equality there is still a great amount of discrimination still going on in the world. It has been assumed that contact between members of different racial groups will reduce prejudice and racism. Contact does produce more positive attitudes, but the improvement may not extend beyond the context where contact occurs (school or workplace), and contact in settings that confirm stereotypes or increase hostility may increase prejudice. One of the first thoughts that come to mind is that a major part of this process is to educate people from a very young age, about prejudice and how they need to be open to all types of people. Schools need to be culturally diversified so that a child can experience other types of people firsthand. This is not going to be as simple as it sounds, especially when you put into perspective financial situations and where schools are located, but it is important that from a young age people experience all types of cultures. Another way in which to educate people is by stressing that people are all different, wither it is the way they dress or the way they talk. So instead of looking down on other people's differences we need to be taught to celebrate them. Prejudice is something that still plagues our society, yet it has definitely improved over time and if things keep progressing, prejudice could possibly cease to exist in the future, as long as we keep educating our children and society, we will be heading towards the right track. ...read more.