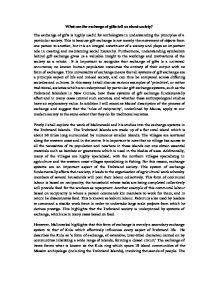 What can the exchange of gifts tell us about society?

What can the exchange of gifts tell us about society? The exchange of gifts is highly useful for anthologists in understanding the principles of a particular society. This is because gift exchange is not merely the movement of objects from one person to another, but it is an integral constituent of a society and plays an important role in creating and maintaining social hierarchy. Furthermore, understanding symbolism behind gift exchange gives us a valuable insight to the workings and motivations of the society as a whole. It is important to recognise that exchange of gifts is a universal occurrence; no known human population consumes the entirety of their output with no form of exchanges. This universality of exchange means that all systems of gift exchange are a principle aspect of life and indeed society, and can thus be compared across differing societies and cultures. In this essay I shall discuss various examples of 'primitive', or rather traditional, societies which are underpinned by particular gift exchange systems, such as the Trobriand Islanders in New Guinea, how these systems of gift exchange fundamentally affect and in many cases control such societies, and whether these anthropological studies have an explanatory value. ...read more.

of the Kula, he would suggest that for the Trobriand Islands the Kula as a cultural activity 'is to a large extent a surrogate and substitute for head-hunting and war.' Whether or not this is the case, Malinowski's descriptions tell us a huge amount about the societies based on the Kula. The famous sociologist, Marcel Mauss famously questioned 'What power resides in the object given that causes its recipient to pay it back?' He argued that no gift is free but instead gift giving is a form of reciprocal exchange. He studied the North American potlach, which is essentially a gift exchange festival or ceremony practiced by the aborigines of the Northwest coast of North America, such as the Ha�da and the Kwakwaka'waka cultures. Mauss states that events such as the potlach are religious, juridical and moral, relating to 'both politics and the family' and are economic events concerned with 'production and consumption'. Mauss suggests that this embodies a total system of giving which is universally echoed in human systems of exchange. Within this system a gift may be reciprocated with an item of equal value, and thus statuses within a society will remain stable. Mauss argues that the given gift is a vehicle for the spiritual, religious or magical force of the giver, and because the ...read more.

Finally, I would like to explore the notion that these rules of reciprocity also apply to our society in 21st century Europe. The UK economy consists of the market sub-economy, the redistributive economy, the domestic economy and the gift economy which is, as with traditional societies, ruled by reciprocity. This can be highlighted by the well known embarrassment of receiving a gift at Christmas from someone who you have not got one in return. The extent of spending of the population at Christmas time is an indicator of the existence of a gift economy, as undoubtedly people would not buy many goods if it weren't for reciprocity. To conclude, it is clear that by examining gift exchange, not just as an action but as a symbolic act, anthropologists can gauge the causes and motivations behind different facets of society such as hierarchy, rank, trade and inter-tribal relations. Malinowski said of the members of Kula that none had knowledge of the total outline of their social structure, but merely know their 'motives, the purpose of individual actions and the rules that apply to them. Beyond this is out of their mental range.' This is in fact the task of the anthropologist; to take fundamental aspects of society such as gift exchange and examine how that influences the lives of the people and indeed the structure and functioning of society. ...read more.