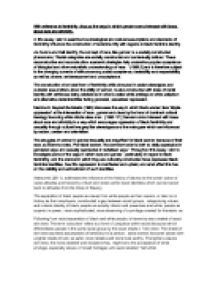 With reference to femininity, discuss the ways in which gender norms intersect with ideas about race and ethnicity.

With reference to femininity, discuss the ways in which gender norms intersect with ideas about race and ethnicity. In this essay I aim to examine how ideological and cultural assumptions and standards of femininity influence the construction of racial identity with regards to black feminine identity. As Cuomo and Hall identify, the concept of race, like gender, is a socially constructed phenomena; 'Racial categories are socially constructed and contextually defined. These deconstructive and reconstructive academic strategies help undermine popular acceptance of biological and other naturalistic understandings of race.' (1999:2) and is therefore subject to the changing currents of attitude among social acceptance, desirability and respectability as well as shame, embarrassment and unacceptance. The construction of an ideal form of femininity while shrouded in sexist stereotypes and outdated assumptions about the ability of women, is also constructed with ideas of racial identity with whiteness being celebrated in what is called white privilege or white solipcism and alternative racial identities facing gendered, sexualised oppression. Mamma in Beyond the Masks (1995) discusses the way in which black women face 'tripple oppression' at the intersection of race, gender and class by the hand of dominant cultural ideology favouring white middle class men. (1995:121) Gender norms intersect with ideas about race and ethnicity in a way which encourages oppression of black femininity and sexuality through cultural imagery like stereotypes and the male gaze which are influenced by racism, sexism and orientalism. The struggles of women in gender inequality are magnified for black women because of their race, as Mamma notes, 'For black women, the dominant order is both racially oppressive in gendered ways and sexually oppressive in racialised ways'. Throughout this essay I aim to investigate some of the ways in which race and gender, particularly in regard to black femininity, and the manner in which they are culturally constructed have oppressed black feminine identities, how this oppression is manifested and upheld, and what effect this has on the visibility and embodiment of such identities. ...read more.

"A body is docile that may be subjected, used, transformed and improved" (1977:136) This enables the rejection of racial identities that don't fit white European femininity as people can alter their bodies and their behavior to take on more characteristics of the white European feminine body. The construction of race and gender is dominated by white femininity as the respectable and acceptable embodiment of female identity, other forms of gendered, racialised itentity is subjugated in order to support the racist social hierarchy which allows for white privilege and invisibility. This subjugation of non-white femininity is maintained by characteristics of power in the social structures. Althusser contended that the individual was born into a 'pre-existing ideological structure with which he comes to identify', (Mamma, 1995:123) where the social practises and attitudes are inflicted onto an individual which is what forms ideas of acceptable forms of behaviour and identity in order to be successful within particular systems in society. When faced with institutionalised racism, and ethnocentrism, black identity must be adapted in order to fit into a system of white privilege, where the individual has to learn how to inhibit aspects of their personality and appearance in order to survive as a subject, knowing that they are being constantly watched and judged. Our behaviour is spread to individuals by systems of ideology (such as white privilege) which is built up of institutions integral to the functioning of the community such as family and the education system, otherwise known as 'Ideological State Apparatuses'. (Althusser, 1970:135-139) This assumption holds that black identity is learnt and the body modified and trained by its relation to white identity which is universally accepted and institutionally valued and trusted. This seems to be true of black masculine identity and values which are often perceived as a threat to white control and are therefore self-muted and self-modified. One only has to look at antagonisms between young black men and police (as an ideological state apparatus) ...read more.

and music industry in order to achieve greater success, and that having the freedom to perform different identities is actually a liberating act which challenges the strict boundaries of race. However, performing different racial identities is frowned upon on the most part in popular culture, as noted in Alibhai-Brown's comments on Beyonce, (2012) and received as a betrayal. Once a black identity identifies which might be seen as too closely with white values they face being an outsider within both systems of values, being discriminated against from both groups for not being 'truly' affiliated with either. In conclusion while there is on-going debate over the effects of constructions of raced gender, the meanings we can deduct from the controversy are complex and bound in contextual meanings depending on the point of examination and the layers of visibility for black femininity. Mamma points out that as new discourses are created and individuals share the social changes, this brings with is 'gains in social power as growing numbers of people take it up and position themselves within it',(1995:64) It is apparent that while the currents of racism and white privilege ideology still construct the raced and gendered identity, new constructions are created from the experiences from those individuals who might be subjects in white privilege but create for themselves new expressions of raced gender. 'we see black women abandoning colonial integrationist for black radical positions, infusing and enriching these with new notions of femininity' (Mamma, 1995:165) As social events coincide and resonate within collective communities and social groups, more understanding of the dynamics of raced and gendered identity are developed past those restricted to white privilege and the inscription of racism, enabling individuals to escape subjectivity and control their own embodiment of their own constructions of identity. Whilst performativity can reproduce ideals of white privilege and racism it can also subvert these ideas and create new values, enabling the constructions of race and gender to be influenced by choices of positivity and pride of cultural difference. ...read more.