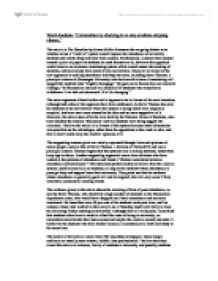 The article in The Guardian by James Meikle discusses the on-going debate as to whether or not a “clock in” system would improve the attendance of university students and cut the drop-out rates from courses. Traditionally, lecturers have passed around a piece of paper for students to mark themselves in, however this approach would involve an electronic monitoring system which would ensure the tracking of students, and has already been tested at two universities. Many are in favour of the new approach in tackling attendance and drop-out rates, including Steve Thomas, a principle lecturer at Glamorgan University who believes this form of monitoring will support the students who “slightly disengage.” He goes on to discuss his own research findings, “In Humanities last year we identified 35 students who would have withdrawn if we had not intervened. It is life-changing.”

The main argument offered in this article appears to be in favour of the new invention, although both sides of the argument have been addressed. As Steve Thomas has said, the students at the universities where the system is being tested were originally sceptical, but have now come around to the idea and are now supportive of it. However, the article does offer the view held by the National Union of Students, who have branded the scheme ‘draconian’ and feel students were being tagged like criminals. I believe the article is in favour of this system because more information was provided on the advantages, rather than the opposition to the clock-in idea, and this in itself would sway the readers’ opinions of it.

The supporting reasons given are mainly expressed through facts and opinions of senior people, such as that of Steve Thomas- a director of Network75 and also a principle lecturer. Thomas argues that the systems aim is to help students, rather than keep tags on them. Another supporting argument comes from advisors who have looked at the patterns of attendance and found a “distinct correlation between attendance and attainment.” This statement pushes readers to believe that the clock-in system could be beneficial to students, as long as the students whose attendance is poor get help and support from their university. They point out that the students whose attendance is generally good will not be targeted, this will only occur if they miss three consecutive learning events.

The evidence given in the article shows the alarming effects of poor attendance, as said by Steve Thomas, who identified a high number of students in the Humanities department alone, who would have dropped out if their attendance had not been monitored. He found that over 50 per cent of his students work part-time, and for instance, those who worked in take-away’s on a Thursday night were likely to miss the following Friday morning at university. Although this is a valid point, I also think that students often have to work to afford the costs of being at university, so universities need to take that into account and maybe the clock-in would just make it harder for the students who have harder financial circumstances to work and study at the same time.

The source of this article comes from The Guardian newspaper, whose target audience are usually more mature, middle class professionals. I believe that they aimed this article at lecturers, family of students at university and possibly students themselves. Lecturers would be interested to see the effects of using a clock- in system, possibly to see if their university would consider taking a similar approach in tackling attendance and drop out rates. Students who read this article are likely to be more wary of their own attendance, and I can understand why so many would be sceptical. Students who are struggling with their attendance, for work reasons, health, family and so on, may be more in favour of it, if it would mean they get the support they need, although the article does not discuss the ways in which the clock-in would benefit students who need this extra help.

The are many counter arguments that could be offered as a critique to the idea of a clock-in system. Firstly, Gemma Tumelty, the president of the National Union of Students believes that although drop-out rates are a cause for concern, and therefore must be addressed, it is the underlying problems that are causing students’ poor attendance that has to be addressed first, for example some students may have jobs that they need in order to finance their tuition, and so on. “Rather than employing draconian tactics and treating these students like criminals by effectively tagging them… we believe more should be done to address the underlying reasons behind poor attendance.” My criticism of the tagging system is that once students reach a certain age and become independent, they have to be able to make their own decisions. If they need extra support because they are not able to make all lectures and so on, then that should be available to them, but it should not be forced upon everyone. When students leave university and get full-time jobs they are going to have to use their own judgement as to whether or not they attend, and deal with the consequences, so I think if students are mature enough to be at university they should be responsible enough to decide if they are going to attend or not. I also believe that further problems would be created for the students who are having to work to pay for their university experience, and this is not fair. If they are determined enough to make it to university and are willing to work at the same time as study in order to fund their tuitions, then I believe that a tagging system would only put them under more pressure, and this in itself could make the drop-out rate even higher.

However, I do see that the tagging system could benefit some, just not all. Although higher education is not compulsory, some students take advantage of the leniency that comes with being at university, which often means students’ missing classes for trivial reasons, such as having a late night out before lectures, laziness and so on. The clock-in system could benefit these students as it might give them a push in the right direction, and may also motivate them to do better.

Much of studying at university means self-learning, students have to be very independent in their studies, so although I understand missing classes can be harmful to their attainment, I still think that as long as students do their assignments, revision as so on, they can still be successful in their studies, so in this way, I don’t think that introducing a clock-in system would make much, if any difference to students’ attainment.

I also recognise however, that the article does not discuss any ways by which this clock-in system would actually help and support the students whose attendance is poor. Monitoring their attendance would be a way of knowing who comes to classes regularly and who doesn’t, but the article does not mention the ways that universities could help those who need it, for instance, extra classes, or for those who do have work or other commitments, maybe rescheduling their classes to fit them better.

Another criticism of the article is that it doesn’t actually inform its readers of the consequences that those with poor attendance rates would suffer. In most non-compulsory education, such as Sixth Form or College, students in this position would be most likely to face warnings and if it the bad attendance continued, probably a permanent exclusion, so if that would be the case with Higher Education, this would surely lead to more drop-out rates than before.