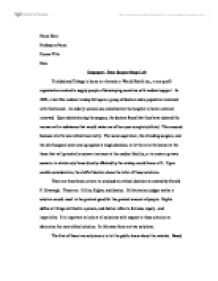 A Case Study of Scapegoating - Trinidad and Tobago is home to a branch or World Health inc., a non-profit organization created to supply people of developing countries with medical support

Name Here Professors Name Course Title Date Scapegoat: Enter Serpent Stage Left Trinidad and Tobago is home to a branch or World Health inc., a non-profit organization created to supply people of developing countries with medical support. In 1981, a horrible medical mishap fell upon a group of doctors and a population involved with this branch. An elderly woman was wheeled into the hospital to have a cataract removed. Upon administering the surgury, the doctors found that they have injected the woman with a substance that would make one of her eyes completely blind. This occured because a bottle was labled incorrectly. The nurse supervisor, the attending surgeon, and the chirf surgeon were now up against a tough decision; to let the error be known to the those that will potentially recieve treatment at the medical facility, or to create a private scenario in which only those directly affected by the mishap would know of it. ...read more.

By letting the mistake be public, this may discourage those that are in desperate need of care to attend the medical facility. Without the need for a medical facility (because of the lack of patients treated) the hospital may close and most of the medical personnel and voulunteers would possibly lose their job or even the right to practice. Of course, it is the people's right to know of the mistake, and it is also justified to explain to the population that the mistake was accidental. But justice will not be served if the doctor responsible for the mistake is not punished for his mistake. The second of the solutions is to continue to keep the matter private and not let anyone know about the mistake. ...read more.

Although it is important and morally responsible for the doctors to tell the population of Trinidad and Tobago the truth, the knowledge given to them about the hospital would only discourage them from recieveing care. Many people will be helped if the rights and justice criterion were supressed. The doctors chose to keep the mistake silent. This is the best decision based on Cavanagh's criteria for ehtics. All of the docters will continue to work where they would like to, and many of the sick and hurt will be administered help at the expense of lying. But, there is still one descrepancy left, the elderly woman. She is now blind because of the failed attempts of the hospital. She should recieve some kind of compensation for the pain that she has felt. Not only this, but the medical assistant responsible for labeling the bottle incorrectly should be punished. This will discourage any further mistakes from being made. ...read more.