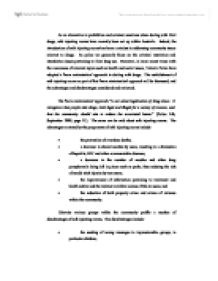 As an alternative to prohibition and criminal sanctions when dealingwith illicit drugs, safe injecting rooms have recently been set up withinAustralia

As an alternative to prohibition and criminal sanctions when dealing with illicit drugs, safe injecting rooms have recently been set up within Australia. Indeed, the introduction of safe injecting rooms has been a catalyst in addressing community issues relevant to drugs. As police we generally focus on the criminal restriction and interdiction issues pertaining to illicit drug use. However, in more recent times with the awareness of relevant topics such as health and social issues, Victoria Police have adopted a 'harm minimisation' approach in dealing with drugs. The establishment of safe injecting rooms as part of this 'harm minimisation' approach will be discussed, and the advantages and disadvantages considered and reviewed. The 'harm minimisation' approach "is not about legalisation of drug abuse. It recognises that people take drugs, both legal and illegal for a variety of reasons, and that the community should aim to reduce the associated harms" (Police Life, September 1998, page 31). The same can be said about safe injecting rooms. The advantages as stated by the proponents of safe injecting rooms include: * the prevention of overdose deaths; * a decrease in shared needles by users, resulting in a diminution of hepatitis, HIV and other communicable diseases; * a decrease in the number of needles and other drug paraphernalia being left in places such as parks, thus reducing the risk of needle stick injuries by non users; * ...read more.

The result being a diminished probability of needle stick injuries to police. It must also be noted however that there is no security that offenders may still choose to carry or use syringes to cause injury or threaten both police and other members of the community. There is no definitive solution to this age-old crime reduction problem. With the advent of safe injecting rooms it is manifestly accepted by both proponents and opponents that literature regarding the dangers of drug use and associated health problems will able to be distributed more effectively to drug users. The safe injecting rooms provide the opportunity for literature to be distributed to drug users who may have otherwise slipped through the system so to speak. Conversely, it must also be said that the age old adage of "you can lead a horse to water but you can't make him drink" is also relevant as far as the literature being applied by the users. Experience shows that unless drug users are prepared to firstly admit that they have a problem and secondly be prepared to overcome that problem then their addiction is unlikely to be conquered. The follow on from the benefits of drug education within or because of safe injecting rooms through counselling and referrals may have the added effect of a reduction in illicit drug use and the ensuing reduction of property and violence crimes. ...read more.

In 1988 Australia participated in a comprehensive international drug convention which was the United Nations Convention Against Illicit Traffic in Narcotic Drugs and Psychotropic Substances. Australia ratified this in 1993. The "convention prescribes that the production, trafficking and use of scheduled illicit drugs should be established as criminal offences under domestic law" (Turning the Tide Report, December 1997). It has been argued that the Federal Government is bound by the terms of the international agreement but Victoria is not due to the fact of the separation of State and federal powers under the Commonwealth Constitution. This however has not been examined in detail yet it can be argued that in such a circumstance that non-compliance by States "could invite the Commonwealth to override recalcitrant State legislation." (Turning the Tide report, December 1997). The ultimate question then is, does the establishment of safe injecting room's breach the international commitments which Australia has entered into? A legal minefield is thrown open and without closer examination an opinion as to whether this international convention has been breached can not be established. Despite the endless legal and moralistic problems that have been raised in discussions about safe injecting rooms, the fact that various health benefits and ultimate benefits of saving lives exist. A safe pilot program for safe injecting rooms in Victoria should be adopted in order to ascertain qualitative and quantitative data to test the advantages and disadvantages that have been discussed. ...read more.