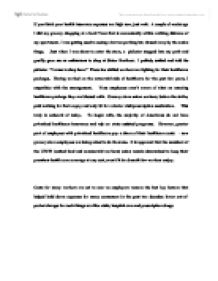 If you think your health insurance expenses are high now, just wait. A couple of weeks ago I did my grocery shopping at a local Vons that is conveniently within walking distance of my apartment. I was getting used to seeing a barren parking lot; chased away by the union thugs. Just when I was about to enter the store, a picketer stepped into my path and gruffly gave me an unlimatum to shop at Stater Brothers. I politely smiled and told the picketer "I came to shop here." These low skilled workers are fighting for their healthcare packages. Having worked on the actuaraial side of healthcare for the past few years, I empathize with the management. Vons employees aren't aware of what an amazing healthcare package they are blessed with. Grocery store union workers, before the strike, paid nothing for their copay and only $5 for a doctor visit/prescription medication. This truly is unheard of today. To begin with, the majority of Americans do not have privatized healthcare insurance and rely on state assisted programs. However, greater part of employees with privatized healthcare pay a share of their healthcare costs - now grocery store employees are being asked to do the same. It is apparent that the members of the UFCW (united food and commercial workers) union remain determined to keep their premium health care coverage at any cost, even if it is a benefit few workers emjoy. Costs for many workers are set to soar as employers remove the last key feature that helped hold down expenses for many consumers in the past two decades: lower out-of-pocket charges for such things as office visits, hospital care and prescription drugs. Members of the United Food and Commercial Workers union who work in the Southern California grocery stores say they remain determined to keep their premium health care coverage, even if it's a benefit few other workers enjoy. ...read more.

In the graph above, it can be seen that both types of consumers are presented with a just and non-discriminatory contract. Both demanders are able to maximize their utilities given their individual budget constraints, since by definitions - indifference curves are tangent to their budget lines. In this diagram, a stable separating equilibrium is possible because of the genetic testing. However, high risk consumers desire the same contrat as low risk buyers because of the lower premiums. If genetic testing was not mandatory, then high risk buyers would lie and purchase the low risk contract, subsequently accessing a higher indifference curve. Asymmetric information: We have established that with asymmetric information the high riskers would be able to access the low risk health insurance due to the fact that insurers are unable to calculate and predict inherent risk. The probability of getting sick or suffering from an injury escalates while premiums and coverage stay constant. As a result of asymmetric information, halth insurance companies incur dramatic losses. This problem is called adverse selection. If genetic testing were not required, then in order to circumvent adverse selection, the pooled insurance method or the option of providing limited coverage for the low risk demanders are the two methods that insurers currently implement to reduce loss. Pooled insurance: The above graph shows that pooling the risks of both the high and low demanders is possiblity, but it is also inefficient and unstable. Since there are separating plans with lower premiums available to low risk individuals, low risk buyers will most likelyl not enroll in a plan where premiums are calculated using pooling. Consequently, low risk individuals opt-out of insurance coverage and will therefore not be covered in the even that the unexpected does actually happens. Additionally, the effect of low risk individuals exiting the risk pool will produce a higher claims mean and thus instigate higher premium for those remaining buyers. ...read more.

Most people are already willing to perform medicals and truthfully report their health status. Some genetic diseases are more prominent in certain races. Thus, the issue of racial discrimination is another factor that stands against genetic testing. Although informed family planning is advantageous genetic testing could result in eugenics. This occurs when people refuse to have children with a certain partner due to them carrying mutated genes. This is already practiced in Greece, Turketyvand Cyprus10. Those of very high risk could become non-insured due to extortionately high premiums. When faced with illness they will struggle to live off their wealth and pay treatment bills. Mandatory testing would solve the economic problems of asymmetric information - but it could instigate just as many social problems for society. Refrences 1. New Controls on Gentic Tests, Wednesday 5th February 2003 http://news.bbc.co.uk/1/hi/health/2723579.stm 2. Rees, Ray. Uncertainty, information and insurance, in Current Issues in Microeconomics. 3. Harris, Rodney. The Health of the Nation. The British medical Journal,1991 4. Donaldson & Gerard. Economics of Health Care Financing, 1993. Chapter 3 & 4 5. Wagstaff, 1986, The Demand for Health, Journal of Epidemiology and Community Health 6. Altman, Daniel.. "Genetics and Insurance." The Economist. (April 2001) 1-6 7. Anonymous. "Leaders: Insurance in the Genetic Age." The Economist. 3:57 (21 October 2000) 1-2 8. Bolger, Andrew & Clive Cookson. "The Risks of Gene Testing: Advances Could Deny Medical Insurance to Many." Financial Times. (7 April 2001) 1-2 9. Doherty, Neel. & Leesa. L. Posey. "On the Value of A Checkup: Adverse Selection, Moral Hazard, and the Value of Information." The Journal of Risk and Insurance. 65:2 (June 1998) 189-211 10. McPake, Barbra, Kumaranayake, Lilani, & Charles Normand. Health Economics: An International Perspective, London: Routeledge, 2002. . 1 Source: New controls on genetic tests, Wednesday 5th February 2003. http://news.bbc.co.uk/1/hi/health/2723579.stm 2 Source: Ray Rees, Uncertainty, information and insurance, in Current Issues in Microeconomics. Macmillan, edited by J.D. Hey, 1989. 3 Source: Ray Rees page 69. 4 Harris, p. 172. 5 Bolger & Cockson, p. 1 6 Ibid., p. 2 7 Anonymous, p.2 8 Anonymous, p.2 9 Wagstaff 10 Altman ...read more.