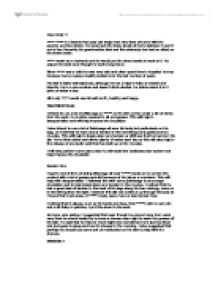 Case study 3 **** **** is a twenty-two year old single man who lives at home with his parents and two sisters. He would put his stress levels at home between 5 and 8 out of ten. Recently his grandmother died and this obviously has had an effect on his stress levels. **** works as a mechanic and he would put his stress levels at work at 6. He enjoys his work even though he works long hours. When **** was a child he was very sick and often spent time in hospital. He has however had no serious health problems for the last number of years. His diet is fairly well balanced, although he has a high in-take of sweets and biscuits. He is a non-smoker and doesn't drink alcohol. He drinks about 4 to 5 pints of water a day. All in all, **** would see himself as fit, healthy and happy. TREATMENT PLAN I intend to use a lot of effleurage on **** as his skin comes under a lot of stress from his work. He is often covered in oil and grease. This will help in desquamation and will help improve his circulation. I also intend to use a lot of Petrissage all over his body but particularly on his legs, as I felt that he had a lot of tension in his hamstrings and gastrocnemus muscles. ...read more.

He also told me that he had tried to use moisturiser but was feeling a bit stupid putting it on thinking about what the boys at work would think of him if they found out. He said that he used the moisture mostly on his hands and had started to use moisturising soap. I went easy and gently over his transverse abdominis, going easy on the large intestine creeping. I did this because he found that his stomach was sore after the last session. I noticed that the tension in his hamstrings was not as pronounced and was moving more freely when I performed some wringing movements. I asked him how he was getting on with his showering at night. He told me that he was able to shower most nights but that one or two nights he was just too tired. I also advised him to cut down on his sweet and biscuit intake as this might be a reason for his tiredness. Sugar and caffeine giving him a quick fix but leaving him more tired in the long term. He said that he would give it ago. SESSION 3 Since the last session ****'s grandmother died and he had been off work. Her funeral was the following day but he decided that he would still attend the session as he needed a break from all the mourning and ritual that surrounds a funeral. ...read more.

I performed a good deal of effleurage over his entire body to try and find the places of tension and stiffness. A lot of his body was tense and I had to perform a lot of petrissage and percussion to try and sort this out. I noticed a lot of tension again around his trapezius. When I was performing some wringing movements I checked in with **** and asked about pressure and he said that it was a bit tender. This was the same around his deltoids. Summary **** has been under a lot of stress recently with the death of his grandmother and his worries about his mum. He is also in a job that is very tireing and he feels exhausted a lot of the time. The oil and grease from his job was having a negative impoact on his skin but with the help of the massage (which helped with desquamation) and the use of skin moistueresers he should be able to get this under control. Although he has a well balanced diet and drinks plenty of water I suggested that he cut down on his sweet and biscuit intake. This could be having an impact on him with regard to his tiredness and also such a high intake of sugar isn't good for his digestion. **** told me that he enjoyed the sessions and that he would continuing having massages done as he felt that they were very beneficial. ...read more.