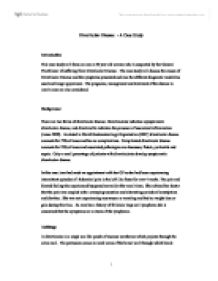 Diverticular Disease - A Case Study Introduction This case study will focus on Joan a 60 year old woman who is suspected by her General Practitioner of suffering from Diverticular Disease. The case study will discuss the causes of Diverticular Disease and the symptoms presented and also the different diagnostic modalities used and image appearance. The prognosis, management and treatment of the disease in Joan's case are also considered. Background There are two forms of diverticular disease. Diverticulosis indicates asymptomatic diverticular disease, and diverticulitis indicates the presence of associated inflammation (Jones 1999). As stated in World Gastroenterology Organisation (2007) diverticular disease accounts for 75% of cases and has no complications. Complicated diverticular disease accounts for 25% of cases and associated pathologies are abscesses, fistula, peritonitis and sepsis. Only a small percentage of patients with diverticulosis develop symptomatic diverticular disease. In this case Joan had made an appointment with her GP as she had been experiencing intermittent episodes of abdominal pain in the left iliac fossa for over 4 weeks. The pain and bloated feeling she experienced happened normally after meal times. She advised her doctor that the pain was coupled with a cramping sensation and alternating periods of constipation and diarrhea. She was not experiencing any nausea or vomiting and had no weight loss or gain during this time. As Joan has a history of follicular large cell lymphoma she is concerned that the symptoms are a return of the lymphoma. Aetiology A diverticulum is a single sac-like pouch of mucous membrane which projects through the colon wall. ...read more.

CT can demonstrate extracolonic diseases (eg, genitourinary and gynaecologic abnormalities) that have a similar clinical presentation. (Levine et al 2005). At CT, diverticulitis appears as segmental wall thickening and hyperemia with inflammatory changes in the pericolic fat. Figure 2). Figure 2: Diverticulitis. CT scan obtained with oral and intravenous contrast material shows wall thickening in the sigmoid colon (arrows) with adjacent inflammatory changes in the pericolic fat. Another common finding is an"arrowhead sign". The arrowhead sign consists of focal thickening of the colonic wall with an arrowhead-shaped lumen pointing to the inflamed diverticula (Salzman & Lillie 2005). The major limitation of CT scanning is the potential difficulty in differentiating diverticulitis from colon carcinoma. Other limitations of CT are the high cost of the examination and its limited availability in certain regions of the world (Joffe 2008). Colonoscopy is desirable in patients with chronic bleeding or an insidious change in bowel habit; these symptoms may be caused by cancer of the sigmoid colon, which is readily overlooked on barium enema in the presence of diverticular disease (Kriel & Probert 2007). Prognosis Asymptomatic diverticular disease comprises the majority of cases of diverticula. Symptoms only occur if obstruction develops, which is uncommon. Symptomatic uncomplicated diverticular disease usually has non-specific symptoms of abdominal discomfort/tenderness and no systemic signs of inflammation (Kriel 2007). Complicated diverticular disease may include the formation of an abcess, fistula's, perforation and bleeding. An abscess is more likely in a patient who has had previous episodes of diverticulitis. Ultrasound, barium enema or CT scanning detects the majority of diverticular abscesses. ...read more.

This can be temporary until the inflammation clears but is mainly carried out only when the patient experiences life-threatening infection. Conclusion Since Joan's appointment with her GP she was referred for a barium enema as her history of lymphoma was a cause for concern. Mild diverticulosis was observed in the sigmoid colon. A further Colonoscopy investigation was carried out to exclude any underlying pathologies. These images returned negative. Joan was referred to a Dietician for information and support in changing her eating habits. She is now eating a high fibre, low fat diet containing plenty of fruit and vegetables, wholemeal bread and cereals. Her fibre intake was increased over a period of six to eight weeks to allow her body to adjust to the amounts. She is drinking 8 glasses of water a day to prevent constipation. Daily exercise is helping reduce the frequency of painful episodes that she was experiencing previously. Joan will always have diverticular disease but she can control the symptoms and lead a normal life by continuing with her new lifestyle. References Aydin, H.N & Remzi, F. (2004) 'Colonic Diverticular Disease' [online] Available from: http://www.clevelandclinicmeded.com/medicalpubs/diseasemanagement/gastro/colonic/colonic.htm [Accessed 1 April 2008]. Crawford, J., 1999. The Gastrointestinal Tract: Pathological basis of disease. Philadelphia: W.B. Saunders Ehrlich, S., 2006. 'Diverticular Disease' [online] Available from: http://www.umm.edu/altmed/articles/diverticular-disease-000051.htm [Accessed 3 April 2008]. Hyde, C., 2000. Diverticular Disease. Nursing Standard [online], 31 Jul., 14 (51), p. 38-43. Available from: http://www.nursing-standard.co.uk/archives/ns/vol14-51/pdfs/p3843w51.pdf [Accessed 1 April 2008] Janes, S.E.J., Meagher, A. & Frizelle, F.A. (2006) Management of diverticulitis. British Medical Journal, 332(7536), 271-275. Joffe, S., 2008. ' Colon, Diverticulitis' [online] Available from: http://www.emedicine.com/radio/topic183. ...read more.