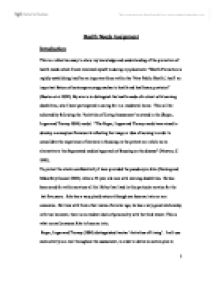 Health Needs Assignment Introduction This is a reflective essay to show my knowledge and understanding of the promotion of health needs which I have involved myself in during my placement. "Health Promotion is rapidly establishing itself as an important force within the 'New Public Health', itself an important feature of contemporary approaches to health and healthcare provision" (Bunton et al 1992). My aim is to distinguish the health needs of a client with learning disabilities, who I have participated in caring for in a residential home. This will be achieved by following the 'Activities of Living Assessment' as stated in the (Roper, Logan and Tierney 1996) model. "The Roper, Logan and Tierney model was aimed to develop a conceptual framework reflecting the image or idea of nursing in order to consolidate the experience of learners in focusing on the patient as a whole as an alternative to the fragmented medical approach of focusing on the disease" (Newton, C 1991). To protect the clients confidentiality I have provided the pseudonym John (Nursing and Midwifery Council 2002). John is 56 year old man with learning disabilities. He has been cared for within services all his life but has lived in this particular service for the last five years. ...read more.

Concept of Need After referring to the findings of my health needs assessment, I decided to select 'smoking' and 'diet'. After discussing the outcome of the assessment with John and care staff we agreed that that the health needs identified are good areas of Johns Health in need of health promotion, in order for John to make informed choices about his own health. (Bradshaw, 1972 cited in Naidoo and wills, 2000; Ewles and Simnett, 1999) identified the following concept of need: Normative: Need defined by an expert/professional Felt: Individual identifies what they want Expressed: What an individual says they need i.e. a felt need turned into a request or demand Comparative: Comparison between similar groups of patients Using this concept of need as a tool, I have recognised that the health need 'smoking' is a felt need as John identified this himself and 'diet' is a comparative need as his body mass index indicates a healthy weight for John would be three stones lighter than his current weight. Action Plan Smoking After talking to John it became clear that he would like to quit smoking as felt it was detrimental to his health. I have set a goal for this health need which is to provide John with information so that he could make an informed decision and also to provide him with any support he may require. ...read more.

I did have concerns arising from promoting giving up smoking when I myself smoke. However I was simply providing John with the information so he could then make an informed decision. In relation to diet and exercise I was weary about encouraging a man who is reasonably unfit to make such drastic changes in his day to day life. Although I was working with John himself and under his consent, I also had the support of Johns care team and project manager. I was astonished by the conscious effort made by John himself to obtain the outcomes set as I appreciate how difficult it must be for someone who has smoked most of their life to not only attempt to give up but to also introduce healthy eating an exercise at the same time. On the other hand John has expressed enjoyment of his new activities as it provides stimulation in John's day to day life and described by himself as 'something to look forward to'. This exercise has increased my knowledge and understanding of the nurse's role in promoting health. I have come to understand that working in collaboration with the client themselves and retrieving the relevant information are key factors in a successful outcome. I believe the skills that I have developed will assist me throughout my nursing career in determining health needs and providing holistic support whilst promoting them. ...read more.