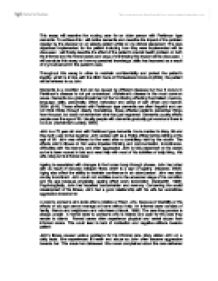 This essay will examine the nursing care for an older person with Parkinson type dementia. To achieve this I will define dementia and describe the impact of the problem created by the disorder on an elderly patient whilst on my clinical placement. The care objectives implemented for the patient including how they were implemented will be discussed. I will finally describe the effect of the patient's mental health problem on both the informal and the formal carers and ways of minimising this impact will be discussed. I will conclude this essay on how my personal knowledge, skills has improved as a result of my involvement in this patient's care. Throughout this essay in other to maintain confidentiality and protect the patient's identity, which is in line with the NMC Code of Professional Conduct (2004), the patient will be referred to as John. Dementia is a condition that can be caused by different diseases but how it occurs in Parkinson's disease is not yet understood. Alzheimer's disease is the most common cause. Dementia is a global impairment of the functioning affecting the intellect, memory, language, skills, personality, affect, behaviour and sense of self. (Evan and Garner, 2004: p216). Those affected with Parkinson type dementia are often forgetful and can not think thinks through clearly. Sometimes, these affected patients remember things from the past, but does not remember what has just happened. ...read more.

Formal carers can be supported through clinical supervision which gives them the chance to address feelings of emotional distress; and also enable them talk about their subjective feelings towards people with dementia and their informal carers (Barker, 2004) When I met John an assessment had already been done so I looked into his note for his identified needs. John's needs were discussed by the multidisciplinary term and Mary, and it was agreed that he should be admitted permanently on the ward as Mary could not cope with caring John at home. Whereby clients can not make decisions as their mental illness has affected their competence to give informed consent; "consulting relatives is often sensible but carries no legal authority". (Evan and Garner, 2004: p124). Mary consented to my care study on John John's identified problems relating to his activities of daily living were communication, maintenance of a safe environment, eating and drinking, personal hygiene, and elimination. A nursing plan was written by the nursing team on how these needs were to be met and Mary signed on it in agreement. A nursing plan provides a guide for individual patient care, the focus being placed on the patient as a person rather on his illness (Carpenito, 2000). The first intervention was to establish a therapeutic relationship based on trust, honesty, respect, empathy and nod judgemental attitude. "The aim is for the client to begin to feel that the nurse has a realistic and non judgemental appreciation of his needs and can be trusted" (Wright and Giddey, 1993: p205). ...read more.