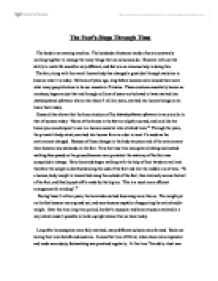 The Foot's Steps Through Time.

The Foot's Steps Through Time The body is an amazing machine. The hundreds of systems inside of us are constantly working together to manage the many things that we as humans do. However with out the ability to walk life would be very different, and feet are an immense help in doing this. The foot, along with the overall human body has changed a great deal through evolution to become what it is today. Millions of years ago, long before humans were around there were what many people believe to be our ancestors: Primates. These creatures essentially known as monkeys, began as just that and through millions of years are believed to have evolved into Autralopitecus afarensis whom over about 3 million years, evolved into human beings as we know them today. Research has shown that the bone structure of the Autralopithecus afarensis is very similar to that of humans today. "Some of the bones in the feet are slightly curved, and look like the bones you would expect to see in a human ancestral who climbed trees."i Through the years, the primate's body slowly evolved into human form in order to meet it's needs as the environment changed. Because of these changes in the body structure and of the environment there became new demands on the foot. ...read more.

Also, since they could not journey far on their own, they became more dependent on others and were more controllable. Another incentive women had for placing their daughters under so much pain was marriage. A woman without bound feet had almost no chance in being married. It was common for men to call off a wedding simply because he discovered she does not have bound feet. It was considered very charming for a woman to walk with all her weight on her heels and therefore became a symbol of chastity. The majority of men were obsessed with the small feet of a woman, and thus bound feet became a major erotic zone. "Poetry and writings from this period express a great infatuation even an obsession bordering on perversion, for small feet."vii In 1895, a society was formed in Shanghai in attempt to put an end to foot binding. Their main argument was that because of the pain a women goes when her feet are bound, her education is jeopardized. The society spread to other major cities and across the country. Eventually, with the revolution lead by Doctor Sun Yat-Sen in 1911, foot binding was made illegal. Approximately 1 billion women had their feet bound, and the effects lasted with them throughout their lifetime. These women became were more likely to fall, less able to squat, and were at greater risk of suffering hip of spine fractures. ...read more.

Be sure they are comfortable, have thick soles and are made from a breathable material. Bath your feet regularly, and it is important that your feet are completely dry before putting on socks in order to prevent the accumulation of bacteria. By doing this in conjunction with occasionally airing out your feet you can prevent odors from being produced. To prevent ingrown toenails(when nail grows into the skin) trim your toenails straight across instead of curved and "leave nail slightly longer than the tips of your toes."x It is common for people with diabetes to develop foot problems more serious than a non-diabetic. This is because "It's a nerve disease and diabetic people frequently have poor circulation in their feet. This can lead to changes in the foot shape and other foot problems." The people who are at risk the most for any complications in foot injuries are those who have had diabetes the longest. Despite the seriousness of foot problems in diabetics, everybody is subject to them. However, everyone can also take preventative measures to help ensure the health of their feet. Proper foot care is essential in maintaining a high state of well-being and comfort throughout life. Footnotes 1K. Hunt, Human Evolution. (1993) www.micro.utexas.edu/courses/mcmurry/spring98/13/moya.html. iiIbid. iiiFeet Washing http://www.feetwash.de.html/few_philosophhy.htm iv Rita Aero, Things Chinese (New York: Doubleday&Company, 1980), p.112 v 6 7 Reflexology www.healthsenter.com/techniques.cfm viii Reflexology ((c)Steve Saran, 1979), ix x ...read more.