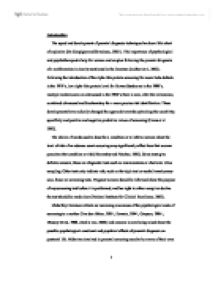 The speed and development of prenatal diagnosis techniques has been little short of explosive (De Crespigny and Savulescu, 2002 ).

Introduction The speed and development of prenatal diagnosis techniques has been little short of explosive (De Crespigny and Savulescu, 2002 ). The importance of psychological and psychotherapeutic help for women and couples following the prenatal diagnosis of a malformation is clearly mentioned in the literature (Leither et al, 2002). Following the introduction of the alpha-feta protein screening for neural tube defects in the 1970's, low alpha-feta protein level for Downs Syndrome in the 1980's, multiple markers seen on ultrasound in the 1990's there is now, after the millennium, combined ultrasound and biochemistry for a more precise risk identification. These developments have radically changed the approach towards optimizing the sensitivity, specificity and positive and negative predictive values of screening (Evans et al 2002). The choice of words used to describe a condition or to inform women about the level of risk of an adverse event occurring may significantly affect how that woman perceives that condition or risk (Abramsky and Fletcher, 2002). Some tests give definite answers, these are diagnostic tests such as amniocentesis or chorionic villus sampling. Other tests only indicate risk, such as the triple test or nuchal translucency scan, these are screening tests. Pregnant women should be informed about the purpose of any screening test before it is performed, and her right to either accept or decline the test should be made clear (National Institute for Clinical Excellence, 2003). Midwifery literature reflects an increasing awareness of the psychological costs of screening to a mother (Van den Akker, 1995 ; Downie, 1994 ; Grayson, 1996 ; Massay-Davis, 1998, cited in Lee, 2000) and concern is now being raised about the possible psychological emotional and psychical effects of prenatal diagnosis on postnatal life. ...read more.

It is strongly recommended that the named midwife accompanies the Obstetrician or Genetisist when giving bad news of a fetal abnormality to a woman. It is also important that her partner or another close family member is present. The midwife may remain with the woman after she has been given the diagnosis to provide continuing support and answer any further questions she may have (DHSSPS, 2003). An accurate insight into women's feelings will lead to the most sensitive and therefore most therapeutic care possible (Cole-Arsenault and Marshall, 2000). Robinson (2001) studied women who had screened 'high-risk' in the quadruple test but went on to deliver normal babies. When a pregnant woman is placed in a position of uncertainty about her fetus she may distance herself from it (Rothman, 1988 ; McGeary, 1994 ; Lee, 2000 ; Robinson, 2001). Raphael-Leff (1991) refers to women who have been given bad news about their fetus as being in an emotional dilemma. These women may hesitate to commit themselves emotionally to their fetus as they may be unsure as to whether or not they will continue the pregnancy. For those parents who are faced with a prenatal diagnosis of a non-lethal abnormality they need support firstly in accepting the diagnosis and then in planning towards the future. A system of clear referral pathways should be established so that pregnant women who require additional care are managed and treated by the appropriate specialist teams when problems are identified (NICE, 2003). These specialists will include, paediatricians, paediatric surgeons, paediatric nephrologists, plastic surgeons, fetal cardiologists and neonatal staff. It is helpful if parents can meet the professional team who will care for their baby after delivery and have a visit to the neonatal intensive care unit before the baby is born. ...read more.

The midwife must be aware of all aspects of the grieving process to enable her to support the family and not only the mother in her care. Conclusion The focus of this assignment has been the role of the midwife in supporting parents following the diagnosis of fetal abnormality. The areas explored include screening and diagnosis, difficult choices, issues surrounding termination, grief and loss. Communication is seen by midwives to be central to the enhancement of care (Kirkham, 1979 ; Hicks, 1993). The Midwives Code of Professional Conduct (UKCC, 2002) mentions accountability in giving and sharing information and research suggests that where staff have been trained in communication skills, patient satisfaction and compliance are increased (Robb, 1999). Interacting with grieving families can stir up painful emotions in the care giver and it is important for midwives to find ways to manage personal experiences of loss and bereavement, when attempting to help others (Thomas, 1999). Garel et al (2002) found that midwives felt emotional distress, when practising in this area, and expressed the need for more staff discussions and support groups within the hospital setting. Pelly (2003) recommended for practice that written information should be given to all women before an ultrasound scan. This should state clearly the purpose of the test, that it is optional and what can and cannot be detected. When a fetal abnormality has been diagnosed the midwife has a key role in supporting women and their families. Like many others areas in obstetrics, prenatal screening has been widely introduced before being fully evaluated. As there are possibilities of harm to mother, fetus and even the wider society there seems to be an urgent need for further empirical research into its effects, especially into those of the future emotional well-being of the child (Robinson, 2001). ...read more.