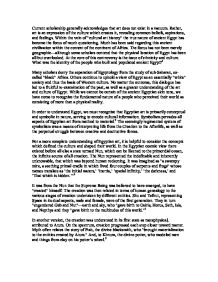 Current scholarship generally acknowledges that art does not exist

Current scholarship generally acknowledges that art does not exist in a vacuum. Rather, art is an expression of the culture which creates it, revealing common beliefs, aspirations, and feelings. Within the vein of "cultural art history" the true nature of ancient Egypt has become the focus of much questioning. Much has been said regarding this ancient civilization within the context of the continent of Africa. The focus has not been merely geographic-although some scholars contend that the physical location of Egypt has been all but overlooked. At the core of this controversy is the issue of ethnicity and culture. What was the identity of the people who built and populated ancient Egypt?1 Many scholars decry the separation of Egyptology from the study of sub-Saharan, so-called "black" Africa. Others continue to uphold a view of Egypt as an essentially "white" society and thus the basis of Western culture. No matter the outcome, this dialogue has led to a fruitful re-examination of the past, as well as a greater understanding of the art and culture of Egypt. While we cannot be certain of the ancient Egyptian skin tone, we have come to recognize the fundamental nature of a people who perceived their world as consisting of more than a physical reality. In order to understand Egypt, we must recognize that Egyptian art is primarily conceptual and symbolic in nature, serving to encode cultural information. ...read more.

Ultimately, the Egyptians believed in the power of human action, derived from a soul or spirit which activates a material body. In its totality, a human was a creation of the divine and the eternal, which was both the impetus and the goal of life on earth. The challenge to educators is to present this vast culture and time period without over generalizing to the point of misrepresenting or obscuring the characteristics of the culture. A higher goal is to lay the groundwork for further learning as a student progresses in his or her understanding of a complex society and its visual records, which were meant as much to obscure as to enlighten. Through the lessons presented in the VAVA Room, it is hoped that students will learn of the underlying concepts which drove Egyptian creative endeavors, rather than simply to copy the style of Egyptian art without a deeper understanding of the art in its cultural context. It is further hoped that the student will be able to relate the concepts presented to his or her own life and culture. This can be done by engaging in projects which reference the self. Notes 1. For a more in-depth study refer to: Crawford, Clinton. Recasting Ancient Egypt in the African Context: Toward a Model Curriculum Using Art and Language, Trenton, New Jersey, Africa World Press, Inc., 1996. Kagan, Donald. "Stealing History: Not Out of Africa: How Afrocentrism Became An Excuse To Teach Myth: Review," The New Criterion, v. ...read more.