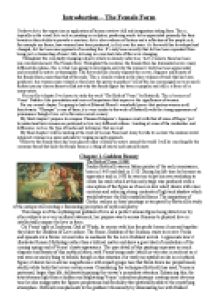 ﻿Introduction ? The Female Form I believe Art is the expression or application of human creative skill and imagination taking form. This is, typically in the visual Arts such as painting or sculpture, producing works to be appreciated primarily for their beauty or their ability to provoke a reaction. Art is also evidence of history and a reflection of the people in it, for example my theme; how women have been portrayed, in Art, over the years. As the world has developed and changed, Art has been one approach of recording this. It?s only been recently that Art has been separated from being just a chronicling of man?s life, to being in a constant state of flux ever changing. Throughout this constantly changing subject, which we loosely refer to as ?Art?, I believe there has been one constant element; The Female form. Throughout the centuries the female form has dominated across many different disciplines, this is what I am going to investigate and why the women?s body has been appreciated and recorded by artists so thoroughly. The Art world has clearly enjoyed the curves, elegance and beauty of the female form, more than that of the male. This is clearly evident in the sheer volume of work that has been produced. Are women more valued as they have the power to produce? All of this has encouraged me to research further into my chosen theme to find out why the female figure has been so popular and still is a focus of so many artists. ...read more.

Chapter 2-Realistic Beauty “Olympia” 1863 Édouard Manet was a French painter of the 19th century. He was one of the first artists in that era to approach modern life subjects. He was also very well known in the changeover from realism to impressionism and was obsessed with emulating the old masters in the Louvre. This painting is highly influenced by “Titian - The Venus of Urbino, 1538” is also reminiscent of Francisco Goya's painting, The Nude Maja (1800). After Manets previous painting ‘Luncheon on the grass’ which caused a disagreement, ‘Olympia’ instigated an even bigger up-roar due to her confrontational gaze and the various items that indicated that she was a courtesan. For example the orchid in her hair, the gold bracelet and pearl earrings which all symbolize wealth and sensuality also there is a black cat perched at the end of her bed that symbolizes prostitution whereas in Titians painting there is a dog instead that portrays fidelity. The black servant in the background presents the courtesan with a sheaf of flowers from a male client this indicates that she is of a servant rank; also her positioning behind makes her look less significant as though she’s almost blended in, the arrangement of the courtesan also shows no acknowledgment for her servant but of the viewer. It’s harsh but the blending in of the servant represents the manner in which they were treated in that period of time. Her pale flesh contrasts sharply against the dark greens and blacks of the background with the white linen and blankets lifting her out into the dominant focus, her added accessories enhance colour into her washed-out flesh. ...read more.

She is holding onto her flesh, which is what a lot of women and men do when they look in the mirror and see extra flesh. I also love how words have been scraped away from the top layer of paint as though to label her. Saville's delicate yet grotesque way of painting creates the delusion that the body is made of meat or of a doughy element; this is indicated by some blue areas amongst the array of pink shades and dark shadows. It?s not the nudity that shocks the viewer but the shear intensity of the tones and shadows in which create an almost animalistic object of size. ?Woman asleep on the floor 2? Lucian Freud was a British painter. Known chiefly for his thickly impacted portrait and figure paintings, he was widely considered the pre-eminent British artist of his time. His works are renowned for their psychological penetration, and for their disturbing scrutiny of the relationship between artist and model. If this painting did not state that this woman was asleep the pure detail would trick me to think that this individual has died, saying that, the tones clearly classifies the skinny, unhealthy physique of that of a woman who are usually portrayed in a glowing, beautiful form. The green sheets underneath add to the morbid, dirty approach and almost blend into the women herself. The main focus isn?t on the woman but of her body as her head is placed insignificantly, at the top of the image making you truly look at her position and helpless atmosphere. ...read more.