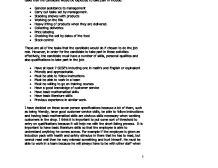 Job analysis I have decided that the job role that I will be interviewing candidates for will be a job working as a shop assistant in the students shop selling food. This job role is a customer service operative role and as such, the candidate will be coming into contact regularly with customers. The role will be paid �5.75/hour. The general tasks that the candidate would be expected to take part in include: * General assistance to management * Carry out tasks set by management. * Stacking shelves with products * Working on the tills * Heavy lifting of products when they are delivered. * Collecting deliveries * Price labeling * Checking the sell by dates of the food * Stock control These are all of the tasks that the candidate would do if chosen to do the job role. However, in order for the candidate to take part in these activities effectively, the candidate must have a number of skills, personal qualities and also qualifications to take part in the job: * Have at least 7 GCSE's including one in math's and English or equivalent * Friendly and approachable. * Must be able to follow instructions * Must be able to work in a team * Must be willing to go on training courses * Have a good knowledge of customer service * Have basic mathematical skills * Have basic literature skills * Previous experience in similar work. I have decided on these seven person specifications because a lot of them, such as being friendly, have good customer service skills, be able to follow instructions and having basic mathematical skills are obvious skills necessary when working customers in the shop. I think it is important to put some sort of threshold to entry on qualifications because it will help me with the short listing process. It is important to have basic literature skills so that the employee is able to understand anything he comes across. ...read more.

This is used by the last two application forms on the table and I think it would be useful to have because it will save the candidate repeating information and will save him time. Also the present or previous employer would be able to tell Warwick University about what the character is really like and how he works which will help them in their selection process. However the business would not be able to contact them without asking permission. I also think that it would be useful to know whether they require a work permit to work in the UK. This is used in 2 of the three application forms and I have decided to include it because if they do require a work permit then they may have to have extra paperwork to be filled in by the business. The last extra feature I have decided to use is asking the candidate how many days they would be able to work in the week. This would be useful to Warwick University because they would be able to see what days are free on the roata and if the candidate cannot work the days that are available then there would be no point in hiring them because they would be no use. Example of a filled in application form appendix 44: scored 16 out of 24 and was very clearly set out and met most of the criteria. Sample application form appendix 45: very well set out and scored 18/24 and met most of the major features of the application form. Sample application form 2 appendix 54: extremely crammed but full of useful information to the employer and also met most of the major features of an application form. From my analysis of the application forms I have decided to include the following in my application form. * Contains the job information * Asks about personal details including; name, address, phone, age, gender and email address * Information on work experience * Information on references * Education * Extra information * Training * Present or previous employer. ...read more.

I also think it is useful to have a section where the final score is shown for each candidate because it makes it easier to compare candidates. Therefore I have given this feature a weighting of 1. As you can see form the analysis table above, only one of the three interview assessment forms actually have a final score section. However I still think that it is necessary to use this feature because I think that it will help me to analyse the candidates and see how well they perform against the criteria. Again all three of the interview assessment forms comply with legal legislation including the race relations act. If one of the interview assessment forms asked the question 'what religion is the candidate?' This would be illegal under the race relations act. West Virginia University: set out with a list of questions and a useful scoring facility. Met all of the major criteria and scored 7/12 Sample interview form: set out in a list again, with an extra comments section. Very short with a 1-5 scoring system 9/12. Sample interview form 2: set out in a table but has a confusing mark system. Reasonably detailed and scored 8/12. From my analysis of the interview assessment form I have decided on the following criteria to be included in my interview application form: o Lay out in a table. o Have candidate name o Scoring system o Extra scoring section at the end for extra qualities o Total score section Interview assessment form Please score the candidate out of 5, 5 being the highest. Record the score at the top of the box and make additional notes underneath. Please add up the score at the end. Candidate name General interview etiquette and technique? Is the candidate friendly Is the candidate able to follow instructions Does the candidate show evidence of good customer service skills Does the candidate display any additional qualities that may be related to the job role? (1 mark per quality up to a maximum of 3) Total score/23 ?? ?? ?? ?? Applied business unit 2 Recruitment 1 ...read more.