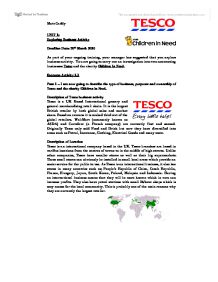 UNIT 1: Exploring Business Activity Deadline Date: 30th March 2010 As part of your ongoing training, your manager has suggested that you explore business activity. You are going to carry out an investigation into two contrasting businesses Tesco and the charity Children In Need. Outcome Activity 1.1 Pass 1 - I am now going to describe the type of business, purposes and ownership of Tesco and the charity Children in Need. Description of Tesco business activity Tesco is a UK Based International grocery and general merchandising retail chain. It is the largest British retailer by both global sales and market share. Based on revenue it is ranked third out of the global retailers. Wal-Mart (commonly known as ASDA) and Carrefour (a French company) are currently first and second. Originally Tesco only sold Food and Drink but now they have diversified into areas such as Petrol, Insurance, Clothing, Electrical Goods and many more. Description of Location Tesco is an international company based in the UK. Tesco branches are based in vari0us locations from the centres of towns to in the middle of high streets. ...read more.

Oxfam, Children in Need, Scope. Tesco operates in the Private sector and it is set up by individuals in order to make a profit. Tesco is a Public Limited Company (PLC). This means that Tesco can buy and sell their shares on the stock exchange. An advantage of this is that you can raise large amounts of capital in a short space of time. However, it is expensive to have shares put onto the stock exchange. Description of Sector of the economy Primary Sectors is extracting raw materials from nature. This can be anything from mining to fishing. Not many people work in this sector anymore but it is an important sector. Secondary Sectors will transform those raw materials into finished goods. For example car companies such as Aston Martin. Tertiary Sectors are most of the population work. Tertiary sector is providing a service to individuals; this includes places like schools, NHS, and other services. Tesco is in the tertiary sector as it provides a service to the general public. Other competitors such as ASDA and Sainsbury's are also in the tertiary sector. ...read more.

The well known mascot "Pudsey" was introduced in 1985 and has become a regular feature. The appeal gains most of its money from donations from private individuals who may have raised the funds by taking part in sponsored events. BT Donate their phone lines and HSBC donate their banking services so Children in Need don't have to spend any money. This enables them to give the most amounts possible to charity. Description of Location Children in Need are a UK based company as it donates its money to charities in the UK. Children in Need are part of the BBC which is a Global company. Description of Business Sector Children in Need is a Voluntary/Non-profitable business as it sets up not to make a profit for themselves, but to raise money for charity and help children who are in need. Description of Purpose - Why does the business exist The aim of Children in Need is to raise as much money as possible for children who are in need. As part of the BBC, they raise money through different programs and celebrities doing certain events. ?? ?? ?? ?? Matt Caddy ...read more.

****
This is a reasonable introduction to business which should have met the pass criteria but contains several errors. The piece on the end about Children in Need is in much less detail and could have been given more prominence. In many ways it is not a typical charity and the writer may have been better to pick another one which does more in the distribution of the money raised.