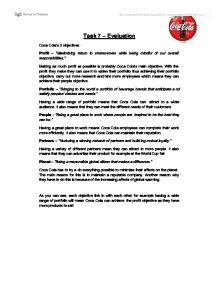 Task 7 - Evaluation Coca Cola's 5 objectives: Profit - "Maximising return to shareowners while being mindful of our overall responsibilities." Making as much profit as possible is probably Coca Cola's main objective. With the profit they make they can use it to widen their portfolio thus achieving their portfolio objective, carry out more research and hire more employees which means they can achieve their people objective. Portfolio - "Bringing to the world a portfolio of beverage brands that anticipate and satisfy peoples' desires and needs." Having a wide range of portfolio means that Coca Cola can attract to a wider audience. It also means that they can meet the different needs of their customers. People - "Being a great place to work where people are inspired to be the best they can be." Having a great place to work means Coca Cola employees can complete their work more efficiently. It also means that Coca Cola can maintain their reputation. Partners - "Nurturing a winning network of partners and building mutual loyalty." Having a variety of different partners mean they can attract to more people. It also means that they can advertise their product for example at the World Cup fair. Planet - "Being a responsible global citizen that makes a difference." ...read more.

Another pricing they could use it competition pricing. This is setting a cheaper price than your competitors, in Coca Cola's case, Pepsi. This doesn't really impact Coca Cola as they're already the market leaders and there are more people who have brand loyalty towards Coca Cola. The strongest method I think Coca Cola should use is value-based pricing. This is when you base the price based on what the product is worth to the customers. For example, If Coca Cola think highly of their beverages, then they can set a higher price as they would still be likely to buy it. With this method Coca Cola ensures they are getting the maximum amount of customers whilst at the same time, they are maximising profit. Portfolio Having a wide range of portfolio has meant that they can gain different types of customers. For example, they have introduced they diet and zero range such as diet coke and coke zero to attract to customers who are trying to cut down on sugar level and people who are trying to maintain their weight. There are two ways in which Coca Cola develops their portfolio. The first way is to buy products from other companies. An example of a product they bought is Glac�au Vitaminwater from Darius Bikoff. ...read more.

Having Coca Cola sold at McDonald's has meant that their products can attract to more customers and make more sales making them also achieve their profit objective as well as their partner objective. Another place where Coca Cola sell their products which has allowed them to sell their products is the FIFA world cup. Coca Cola have bought the rights to only sell their products there whether it be Sprite, Fanta or Bonaqua, they all belong to Coca Cola. Coca Cola have taken advantage of this so they set a high price which the people at the World Cup match have no choice but to pay. Identify and exploit marketing opportunities is a key skill that helps Coca Cola to gather more partners. When identifying marketing exploits then look at opportunities that can be successful and take advantage of it to make profit. One example of how Coca Cola have identified and exploited marketing opportunities again through the James Bond packaging. The reason they exploited it is because James Bond had �11.4 million on its opening weekend. Coca Cola had partnered up with the producers of James Bond and introduce the new packaging. Coca Cola would then give a percentage of this to James Bond As well as achieving their partners as well, they are also achieving their profit objective as they are attracting to more people which will mean they get more sales ?? ?? ?? ?? ...read more.