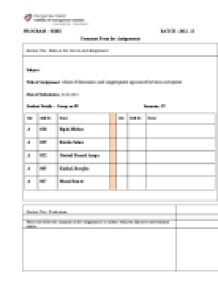 The company fount its dominant position in the marketing of personal computer operating system. The European Commission has imposed fine of US$612 millions. Microsoft has abused its monopoly power, which was created by dominant market shares in several markets and substantial barriers to effective entry. The concerns are that Microsoft has abused its dominance to gain competitive advantages over competitors in other (downstream or adjacent) markets, blocking innovation and exploiting customers. In the US case, in the market for Intel-compatible PC OS, its strategy is to protect the applications barrier by expanding Internet explorer. Share of browser usage, meanwhile depressing shares of competitors like Netscape and Sun Microsystems that may enable Microsoft?s monopolisation of the browser market. In the EU case, Microsoft was accused of abuse of dominance by denying interoperability with its competitors in the market for workgroup server operating systems and foreclosure against incompatible product developers, which enabled it to exercise monopoly power in the downstream market. Not only competitors but also consumers had to suffer from Microsoft?s monopoly. MacDonald?s Corporation The Pizza Giant has entered into franchises agreement with 28 Brazilian parties from whom it collects 24% of gross sales by way of rents in respect of premises and use of its recipes. It has acquired all most all locations and premises around its restaurant so as to restrict the entry of rival brands. The formal administrative proceedings have been opened after preliminary investigation and the case is under adjudication by CADE. ...read more.