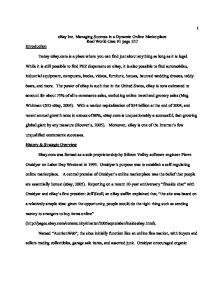 eBay Inc. Managing Success in a Dynamic Online Marketplace Real World Case #1 page 257 Introduction Today eBay.com is a place where you can find just about anything as long as it is legal. While it is still possible to find PEZ dispensers on eBay, it is also possible to find automobiles, industrial equipment, computers, books, videos, furniture, houses, haunted wedding dresses, teddy bears, and more. The power of eBay is such that in the United States, eBay is now estimated to account for about 75% of all e-commerce sales, excluding online travel and grocery sales (Meg Whitman CEO eBay, 2005). With a market capitalization of $54 billion at the end of 2004, and recent annual growth rates in excess of 80%, eBay.com is unquestionably a successful, fast-growing global giant by any measure (Hoover's, 2005). Moreover, eBay is one of the Internet's few unqualified ecommerce successes. History & Strategic Overview Ebay.com was formed as a sole proprietorship by Silicon Valley software engineer Pierre Omidyar on Labor Day Weekend in 1995. Omidyar's purpose was to establish a self-regulating online marketplace. A central premise of Omidyar's online marketplace was the belief that people are essentially honest (ebay, 2005). Reporting on a recent 10-year anniversary "fireside chat" with Omidyar and eBay's first president Jeff Skoll, an eBay staffer explained that, "the site was based on a relatively simple idea: given the opportunity, people would do the right thing such as sending money to strangers to buy items online" (http://pages.ebay.com/community/chatter/2005september/insideebay.html). ...read more.

Current Operations & Strategic Issues Ebay Inc.'s core business is ebay.com, its online marketplace. Ebay's CEO Meg Whitman has described ebay.com as a "dynamic self-regulating economy" (Meg Whitman CEO eBay, p. 257). As previously noted, eBay.com is no longer focused on collectibles which currently account for only about 25% of items traded on the site. There are more than 18,000 categories of items on the site with major categories including computers, consumer electronics, dolls and figures, books, coins and stamps, antiques, photo, pottery, sports memorabilia, toys, jewelry, and automobiles. Ebay has been surprised by the success of some categories such as used cars. Currently, more automobiles are sold on eBay than are sold by Auto Nation, the leading volume car dealer in the U.S. Auto and auto parts sales are handled on a sub-site called eBay Motors. There are also separate sub-sites for other leading or specialty categories like industrial products (eBays B-to-B marketplace). In addition to listings of different individual items within categories, eBay.com features entire "online stores" including milling machines. While eBay is known as the online auction house, a growing percentage of eBay transactions are non-auction or "buy now" transactions. It has been speculated that about 30% of the gross merchandise volume traded on eBay was exchanged at a fixed price, rather than through bidding and auction. While it is believed that many eBay users enjoy the "entertainment" of the auction as well as believing that this is the best way ...read more.

Ebay also has numerous opportunities to expand out of its core auction/sale business and to offer ancillary services like Web hosting, private auction management, and advertising services. Ebay's PayPal division also offers tremendous opportunities for expansion beyond Ebay both in the U.S. and in foreign markets. Ebay.com biggest threat comes from competitors. For many years eBay successfully trounced its competition, especially its smaller auction house rivals. Top rivals Yahoo and Amazon.com have figured out how to fight back and in many cases are offering their customers a broader range of services at a lower rate and with a more personalized touch. Changes in technology, the progression of pay-per-click advertising and growing tech sophistication among users has also made the independent web site more of a competitive threat. Ebay must find a way to effectively compete head on with its top rivals at Yahoo and Amazon.com and the only way it is likely to do this is by offering more and different services. It is recommended that eBay begin to offer a broad range of Web hosting and Web marketing services to sellers. Sellers are clearly dissatisfied with eBay on a number of levels. Ebay must start devoting more attention to customer service so that these sellers don't migrate to other venues. Meanwhile, eBay should also attend to the desires of its buyers. Ebay should intensify its efforts to use data-mining technology to build buyer profiles so that it can direct market to buyers as well as provide for a fee "lead lists" to sellers. ...read more.