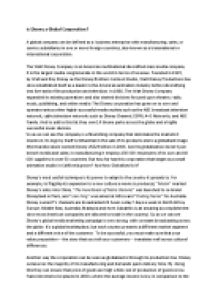 Is Disney A Global Corporation?

﻿Is Disney a Global Corporation? A global company can be defined as a business enterprise with manufacturing, sales, or service subsidiaries in one or more foreign countries, also known as a transnational or international corporation. The Walt Disney Company is an American multinational diversified mass media company. It is the largest media conglomerate in the world in terms of revenue. Founded in 1923, by Walt and Roy Disney as the Disney Brothers Cartoon Studio, Walt Disney Productions has since established itself as a leader in the American animation industry before diversifying into live-action film production and television. In 1986, The Walt Disney Company expanded its existing operations and also started divisions focused upon theatre, radio, music, publishing, and online media. The Disney corporation has gone on to own and operate various other highly successful media outlets such as the ABC broadcast television network; cable television networks such as Disney Channel, ESPN, A+E Networks, and ABC Family. ...read more.

For example, to flagship its expansion to a new culture a movie is produced; ?Mulan? marked Disney?s entry into China, ?The Hunchback of Notre Damme? was launched to re-brand Disneyland in Paris, and ?Lion King? was aimed at Africa and ?Finding Nemo? for Australia. Disney owned TV channels are broadcasted 24 hours a day 7 days a week in North Africa, Europe, Middle East, Australia, Malaysia and even Cuba(this is an amazing accomplishment since most American companies are allowed to trade in the country). So as we can see Disney?s global media marketing campaign is very strong, with constant broadcasting across the globe. It's a global marketplace, but each country presents a different market segment and a different voice of the customer. To be successful, you must make sure that your value proposition -- the story that you tell your customers -- translates well across cultural differences. ...read more.

Those assembling stuffed toys suffered skin allergies and sore throats from inhaling fine particles from the stuffing. Figure 1 In July 2008, Disney reported a 9% rise in net quarterly profits. "As we go into 2009 we believe that the challenges we faced in 2008 will still exist, and as we manage the company we're managing it with that in mind," said Chief executive Robert Iger. This was during the beginning of the global recession of 2008-11. If we look at a stock chart mapping the rise and fall of Disney over the last year (Fig 1) In 2001 Disney aimed to boost the proportion of its international revenue to above 30% in the next five years, from 18%. This was very ambitious but with various successful business ventures focussing on expanding their corporation to dominate in other areas globally it was able to do this. ...read more.