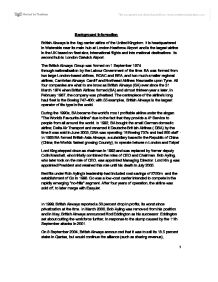 Background Information British Airways is the flag carrier airline of the United Kingdom. It is headquartered in Waterside near its main hub at London Heathrow Airport and is the largest airline in the UK based on fleet size, international flights and international destinations. Its second hub is London Gatwick Airport. The British Airways Group was formed on 1 September 1974 through nationalisation by the Labour Government of the time. BA was formed from two large London-based airlines, BOAC and BEA, and two much smaller regional airlines, Cambrian Airways Cardiff and Northeast Airlines Newcastle upon Tyne. All four companies are what to are know as British Airways (BA) ever since the 31 March 1974 when British Airlines formed (BA) and almost thirteen years later, in February 1987, the company was privatised. The centrepiece of the airline's long haul fleet is the Boeing 747-400; with 55 examples, British Airways is the largest operator of tits type in the world. During the 1990s, BA became the world's most profitable airline under the slogan "The World's Favourite Airline" due to the fact that they provide a A* Service to people from all around the world. In 1992, BA bought the small German domestic airline; Delta Air Transport and renamed it Deutsche British Airlines ( DBA) by the time it was sold in June 2003, DBA was operating 16 Boeing 737s and had 800 staff. In 1993 BA formed British Asia Airways, a subsidiary based in the Republic of China (China; the Worlds fastest growing Counrty), to operate between London and Taipei. Lord King stepped down as chairman in 1993 and was replaced by former deputy Colin Marshall, who initially combined the roles of CEO and Chairman. Bob Ayling, who later took on the role of CEO, was appointed Managing Director. Lord King was appointed President and retained this role until his death in July 2005. Benifits under Rob Ayling's leadership had included cost savings of �750m and the establishment of Go in 1998. ...read more.

When one feels like they've done something valuable for the company, they will be motivated to carry out the activity a second time to feel this sense of achievement again. This will be good for BA and the employees BA get a hard working employee and the employee gets extra allowances. * British Airways Retirement Plan (BARP) is the pension scheme for all new employees working full-time. This is a 'contracted in', defined contribution scheme. Additionally members of BARP will be subjected to a qualifying period, qualify for Permanent Health Insurance. Although this is not entirely a financial incentive, it is still a motivation for employees to do their work well. This method of motivation relates to Maslow's theory in which he said that when employees have a sense of safety at their work place, they feel motivated to work harder. Also when they know that they have such an opportunity to have health insurance, and a Retirement plan come as a package for working with BA, they wouldn't want to quit as those are great deals for some people, and they will therefore work harder to keep their jobs. Not everyone has to opt in for the retirement plan; it's just there as one of the fringe benefit that BA offers. Those who are planning to work at BA for more than 10 years are advised to opt into the retirement plan. The employee feeling safe at their work place means that they end up staying with BA for quite a while longer than they expected to. * All pilots are eligible for the generous non contributory Loss of Licence scheme provided by the Company - This is for if any member of the flight crew lose their license, they are insured for it by BA. The temporary benefit they get out of this Is that there Is that the pilot's salary doesn't stop getting paid. ...read more.

Doing this will fulfil the employees esteem needs on Maslow's hierarchy of needs as the employee will gain confidence, and is sure that they have the respect of BA. They training part of their motivational strategy is the largest in the organisation as it covers every employee from the flight crew, down to administration, and maintenance. This is good for both employees and BA. Employees because they gain required, and also additional skills for them to work with, all expenses are paid for by BA, for induction training, off-the-job, and on-the-job training for all departments of BA. It is good for BA as they will save n recruitment costs, and will also have very qualified staff, and those who choose to partake in additional training or development, will be alot more useful to British Airways. However, it could also have its downside, for BA, the training costs will be an awful lot as they cover the whole organisation, and most of it is done off-the-job, which makes costs even more. I would suggest that BA move some of their training from off-the-job to on-the-job. It will cost a little at first, to buy the equipments needed, but on the long run, it should be cheaper than off-the-job training. They also have their appraisal system. This motivates employees as it fulfils their esteem needs on Maslow's hierarchy of needs as they feel a sense of achievement, and thus will be accepted and will have respect of others. The employee will also be given feedback on whether they have worked hard and what they could improve. This will benefit BA as it will mean that there is alot of improving job performances as most employees would want to be praised for working hard and will therefore work towards it. It will also help them as it will be a method for BA to assess performance across all departments. There will also be improved communication between employees and their managers. ?? ?? ?? ?? 1 ...read more.